Gunning For #1: King Khoi Returns For The Crown! 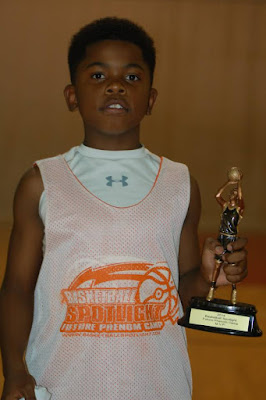 One of the most special and exciting players regardless of class has to be the “King” who was introduced to the nation at last year’s Basketball Spotlights Future Phenom Camp. Prior to his arrival his intent was clear he was laser focused on becoming the top player in the class – well people in the desert want ice water too; so when Thurmond took the floor he couldn’t request what he wanted he had to take it; he was forced to kill what he ate – and eat he did putting on show each and every time he took the floor. He showed a complete game and skill set that included much more than scoring, he dished it, he defended, and most impressive was his communication, leadership, and will to win. He is a born leader and winner and looks like he has played this game before, he’s an old soul who stays in the gym working on his craft and has no plans whatsoever of relinquishing his current position as the #1 player in the class. He is not running, he is not hiding he will be in attendance August 22nd and 23rd to prove he is still that guy, the message if you want his spot come and take it!

Khoi is constantly in attack mode on the offensive end of the floor. He leads the break and can finish on the break equally as well, he gets to the rim at will and proved he knock down open or contested threes. His mid-range is strong and he has next level confidence in his game. Even with such a diverse skill set and high level of offensive talent Khoi would rather set up a teammate to score, a young player who understands the value of making those around him better. For those that understand the value of playing against the best it gets know better than the “King” and it gets no better Basketball Spotlight Future Phenom Camp.

CLICK HERE IF YOU HAVE GAME
Posted by basketball spotlight at 7:41 AM