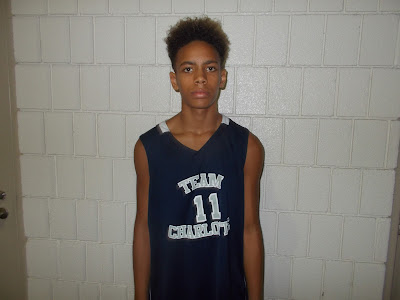 The 13U AAU Nationals took place in Greensboro, NC and Basketball Spotlight was in the building. We got a chance to see some of the top players in the country at this event. Here’s our third recap from this event.

Tristan Maxwell Guard (Team Charlotte)- Tristan is similar to his father Mad Max (Vernon Maxwell) in terms of quickly becoming the life of the party. The combo guard repeatedly heated up from deep, mid-range and finishes at the cup. He was able to operate around the pick and roll or the high screen. In transition he beat the defense down the floor and score easy on backpedaling defenders. He constantly puts pressure on the defense. He is a certified scoring threat from anywhere on the floor. 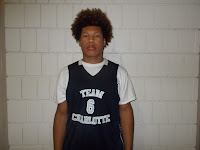 Josh Rubio Forward (Team Charlotte)- Rubio became a scout favorite and a opponents nightmare. The wide framed forward scored with ease on the blocks and made a living carving out position. He has an intimidating posture and plays with great aggressiveness. What’s the most intriguing aspect of his game is his court vision. This kid made it his business to hit teammates on the fly and cutting through the lane. His unselfish play stood out and helped his squad be successful. 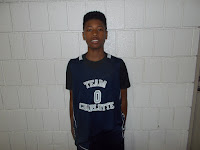 Brock Williams Guard (Team Charlotte)- Williams is a hard-nosed point guard with some quickness and sneaky athleticism. He squeezes through gaps in the defense while also dishing to teammates or finishing off plays himself. When you throw in the type of defense he plays he’s definitely a player you wouldn’t mind being in a foxhole with. 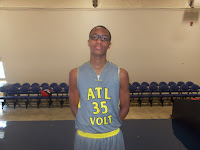 Joshua Taylor Forward (Atlanta Volt)- Taylor a good on the eyes as he sled deep in the post and used Tim Duncan type touch to finish against NY Rens. I like his length which looks to be stretching out more in years to come. Naturally at this age he does need to add strength but when it all comes together the ATL might be looking at their next star. An immediate impact player. 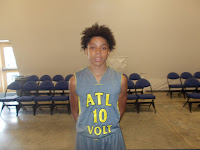 Caleb Murphy Guard (Atlanta Volt)- Murphy stays in attack mode and enjoys breaking down defenders. He has the talent to weave his way through traffic on his way to the tin. I like his size for the guard spot and his knack to get rid of defenders. He has a toughness you can’t teach. 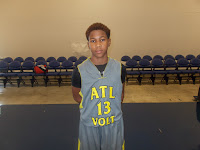 Davon Smith Guard (Atlanta Volt)- A natural pass first point guard Smith can get anywhere he wants on the floor. He has an array of dribble drive moves and will put some mustard on his passes. As he gets older he will learn not to play with the rock as much but instead make a move and go.

CLICK HERE IF YOU HAVE GAME
Posted by basketball spotlight at 8:05 AM