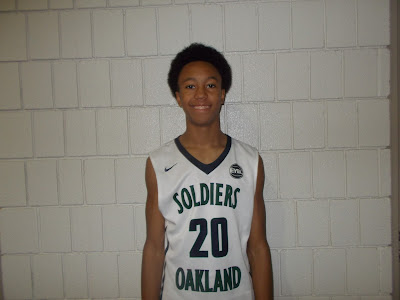 The 13U AAU Nationals took place in Greensboro, NC and Basketball Spotlight was in the building. We got a chance to see some of the top players in the country at this event. Here’s our last recap from this event.

Xavier Dusell Guard (Oakland Soldiers)- Dusell is a legit wing and one of the best prospects I saw with this group. He has a fluid outside shot and runs the floor like a deer. Oakland Soldiers used Dusell to spot up when spreading the defense and he also launched the 3 point in transition. His shooting help put away a stubborn Team Charlotte in bracket play. 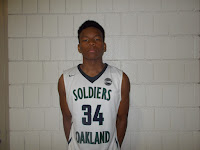 Kendall Munson Forward (Oakland Soldiers)- Munson was the inside force for the West Coast squad. He has decent leaping ability and fights hard to get position. He used good touch to finish off passes on the post. He runs the floor well but I didn’t get a chance to see him handle the rock much. As he develops this should be an area of emphasis for him. Josh Christopher Forward (Oakland Soldiers)- Speaking of running the floor Christopher gets it done in transition. He a superb athlete and one of the best finishers I saw at this event. I also feel he could very effective on the defensive end by playing passing lanes and guarding multiple positions.

Jamir Thomas Guard (Oakland Soldiers)- Thomas battled back after having early trouble with the Team Charlotte pressure. Once he settled in he was able to make some big plays down the stretch including clutch free throws to help them seal the deal. 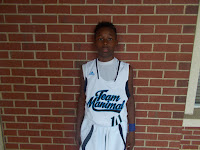 Elijah Pickens Guard (Team Manimal)- The Chicago squad lost to Team Melo in bracket but this kid came to play. He stretched Team Melo defense with treys from the cheap seats. Pickens was seen launching treys a few steps past half court. He may be small in size but was big in stature and the heart of a lion. His range was remarkable. 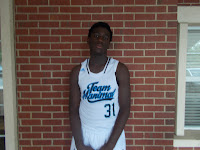 Tyrelle Afunt Forward (Team Manimal)- Built like a linebacker Afunt was a force on the glass and playing defense for the Chicago squad he did all the dirty work including boxing out and grabbing boards. He led the physical charge for this squad all week.

Noah Harris Guard (King Street Kings)- I got a chance to see KSK battle hard against the Gauchos and was impressed with the play of Harris. This kid had the 3 ball dropping with all types of bodies running at him. Harris has a sweet stroke and wasn’t afraid to pull the trigger on the frontline.

CLICK HERE IF YOU HAVE GAME
Posted by basketball spotlight at 1:15 PM