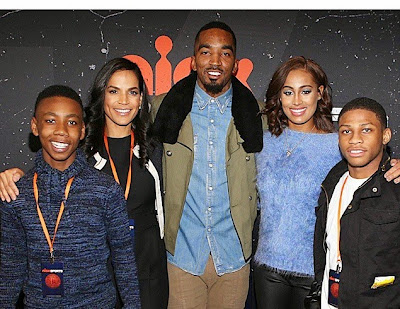 Wassup World, Im back this week, really excited for All­Star weekend and the movie premiere of the documentary “Little Ballers” which I will talk about later.

On Monday, I woke up and, got ready for school and then I was told I had a 2 hour delay, which I was happy for but I was mad because I already woke up. But, then my school called and said that we were closed and I had off. i was really happy and went back to sleep. During the day, I caught up on some of my future homework that was due later that week. I also, had a really good conditioning workout that I went to. I did 2 miles on the treadmill, worked with regular and 2 pound ropes for over 30 minutes along with a circuit of other conditioning drills.

On Tuesday, it was back to school and my Spanish teacher was proud of me because I scored the highest on my most recent quiz(I got a (98%). But, I wasn’t too ecstatic for the next couple of periods because I created a less than disappointing science project and I was really hard on myself about it and so was my teacher. Later that day, I had a game at my school which was a relatively easy game for us and I ended up with 19 points and 7 assists along with us winning by 30. I also went to the Hard2Guard celebrity game. It was pretty fun and there were some pretty well known celebrities like, Fat Joe, Troy Ave, Victor Cruz, Rashad Jennings, DJ Khaled, and CC Sabathia. It was a fun night.

Wednesday, was another sort of rough day for me in school because I did not get two of my test signed in math and my math teachers were really upset about that. The day ended on a very good note though because I did really good on my English essay that we wrote in class the day prior(97%). We had a game against a horrible team and we won by 40 so, I did not play much.

Thursday­, I was hyped about playing River­Dale, a school that one of my Rens teammates, Sam Klores, plays on. When we got to their gym, the trash­talking already began. Throughout, the game, Sam and I were talking trash to each other and my goal was to shut him down, so he did not have bragging rights going back to Rens practices and such. I ended up shutting him down, even though we lost by 5. I had a pretty good game scoring 18 points, 5 assists, and 6 boards. On the way home though I was not feeling to well and I felt really weak. When I got home I went to sleep and I kept getting up to throw up and I really was not feeling good.

Friday, I stayed home and got better for this weekend. Saturday, I woke up real early to go get a haircut in Brooklyn. I came back home to get ready for this movie premiere of “Little Ballers” that will be airing on Nick on February 25th at 9 p.m. Nickelodeon was hosting the event and it was extremely fun. We got interviews from people from NBA TV, Nick Sports, New York Post, WPIX, Real Talk NY, and much more. We did some funny clips with Baron Davis, along with making some mini commercials for ourselves. Players like Skylar Diggins, Andre Drummond, and J.R Smith were there along with so many different kid actors/actresses and promoters, it was one of the best experiences I’ve ever had in my life. Following this event, I went to the All ­Star festivities with a couple of my friends and had such a good time in amazing seats. It was one of the best All­ Star Saturday’s in my opinion in a couple of years and I was there to witness it. After, I was fortunate enough to be able to go into the VIP club and see and meet so many famous people in one place, It was great.

Sunday, I went around to different Modell’s meeting different players like Zach Lavine (which I got to take a picture with the Slam Dunk Trophy), Al Horford, Mason Plumlee, Trey Burke, and Michael Carter Williams. I was able to meet and talk to them they were all really humble, hard­working guys. Later, I went to the All­ Star game with my dad and had a lot of fun. I also met up with people that I knew were there in the arena, it was the best way to cap off such a great weekend. I need everyone to please tune in into Nickelodeon on Wednesday the 25th and watch the documentary “Little Ballers” at 9 p.m it is and will be truly appreciated. I also want to shout out Crystal Mccrary­Anthony for allowing all of us in the documentary to be a part of such a great experience.