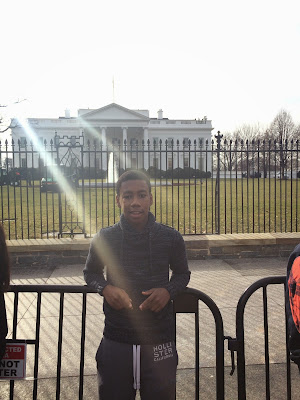 Judah McIntyre At The White House

Wassup World, I’m back this week preparing for BBallspotlight’s Winter Warz and gearing up for my report card which I get on Thursday.

Monday, was a great day because I got out of school early because of the “historic blizzard” that was suppose to happen. Since, this was the first day back since we came from D.C, the teachers didn’t assign us much homework. So, I ended up going and staying over at my friends house while it snowed. We had a huge football game in the snow and went sledding after which was really fun.

Tuesday, we had no school and since the blizzard was not as historic as they said it would be, I ended up being picked up from my friends house and going back home. Since, I had no homework and my parents could not take me anywhere, I decided to help shovel around my house and on my street. After, I started to work on my handle in my basement. I did different drills in my basement working on my control and speed in my handle. Later, I watched some TV and that was the end of my day.

Wednesday, it was a pretty good day in school besides for the fact that I had to recite a poem that I did not memorize. Thank­ God, it was not the actual recitation day, so, I had a night to go home and memorize it. Later, I had practice at school and it was a solid practice. But after, I was able to work with myself on my game. I was able to get a lot of shots and work on my mid­range jump­shot. Later, I went home to memorize this spoken­ word poem that I had the official reciting on Thursday.

Thursday, I had to dress­ up and perform my poem in front of half my grade. The poem was “I apologize” by Oscar Brown Jr. I was told by viewers and my teachers that I was very well­spoken and I performed very well. Later that day, I had a one hour workout with my school team and it was good because because we worked alot on defense which I need to work on a lot. That night, I stayed to watch my Varsity team play. We played a team that we were suppose to blow out but we ended up beating them.. I watched my youngbul Jalen Carey, hit the game winning three to put us up by 1 as the game ended. It was good to watch the freshmen players be productive and bringing the team to victory because i see myself being that position next year as a freshmen.

Friday, I had no regular classes and It was a really fun and easy day. I got out of school early because of my game. The school we played was not good and we ended up winning by 40. I only played 6 minutes and i ended up with 11 assists which I thought was pretty good.

Saturday, It was a really light day and since everyone in my family was out the house, I was left to clean, which I think every kid does not like doing. After, I went to my sisters game and surprisingly they both played pretty well. Later that day, I did not doing anything but relax.

Sunday, I had RENS practice from 12­-2, we worked on skill development along with getting ready for next week’s tournament. I went back home and got ready for the Super Bowl Party I was going to. The party ended up being extremely fun and my team(the Patriots) won which I was really happy about. I also had ALOT of great food which is always good to have and that was the end of my week.

Peace, See Ya Next Week! Follow My Life: j_macvip
Posted by basketball spotlight at 7:14 PM