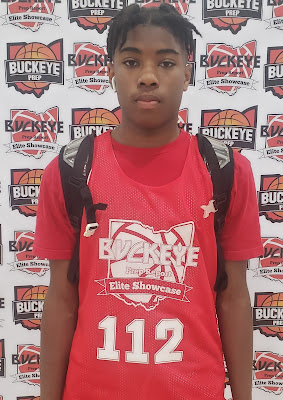 ZYMIR KNOX
The Buckeye Prep Elite Showcase took place today and Basketball Spotlight was in the building. Here’s a look at the top performers from the Class of 2026 that impressed us.
Buckeye Prep Report Elite Showcase Class of 2026 Top Performers
Zymir Knox (Wing Forward)- Knox stood out early with his size and ability to finish at the rim. In transition he was virtually unstoppable in terms of finishing with excellent body control. Zymir also gets it done in the half court set but picking his spots to attack and scoring over smaller defenders. He was one of the best we saw at this event.
MC Walker (Guard)- Walker is a very explosive scoring guard. He was tough to maintain when he was going downhill. He’s capable of bursting through multiple defenders and finishing through contact. Walker also scores in bunches. Finally Walker gets after it on the defensive end by locking in on ball handlers. He was a joy to watch.
Seven Allen (Guard)- This guard keeps the defense under pressure. His quickness makes him hard to defend because he’s capable of hitting different gaps and getting into the lane whenever he wants. In transition he throws some nice passes or finishes on his own. He’s a very confident guard when the rock is in his hands.
Brody Hatfiield (Guard)- Hatfield is a tough scoring point guard. He knifed through the defense and scored with body control. He seems to always be in attack mode and loves facing touch defenders. On defense I enjoyed how he moves his feet and pressures ball handlers.
Damien Clay (Guard)- The southpaw is very tough along the baseline and in the paint. He scores with athletic finishes and with a mean floater. He used an array of dribbling moves to get past defenders on his way to the tin. He’s totally wired to score.
Treyton Schroeder (Guard)- Schroeder is a hard-nosed point guard that knows how to direct a team. He flourished in the open court by racing down the floor and dropping several dimes. He also can hit the open shot when the ball rotates his way. On defense he didn’t make things easy for ball handlers.
Trey Brundidge (Forward)- Brundidge can get things done inside but loves showing his range from deep. The southpaw knocked down several trey balls when the defense had backed off. After shooting he left his hand high to remind defenders of his stroke.
Posted by basketball spotlight at 7:55 PM