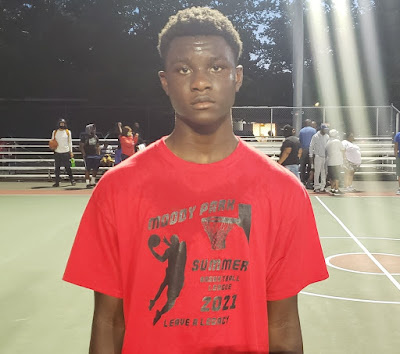 Brandon Russell
The Moody Park Summer League Middle School .AAU Division had some good games tonight and Basketball Spotlight was in the building.
Moody Park Summer League Top Performers
Brandon Russell Guard (Made Different)- The team name fits this kid because Russell is made different. The big, strong guard was explosive and went on a scoring spree at Moody Park. His game packs ball handling, shooting with body control packed in a built for high school frame. Russell game it to his opponents from all three levels. He stepped up to the competition and finished the game with 25 markers. He looked like the best player I’ve seen thus far at this summer league. 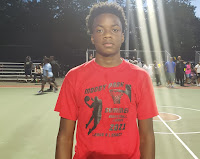 Cameron James Forward (Made Different)- James was a good compliment for Russell. He got good post position and used a turn around in the middle of the lane. When he started scoring his production picked up quickly. I like his touch and soft hands in terms of catching the rock. He was second on the team in scoring with 16 points. 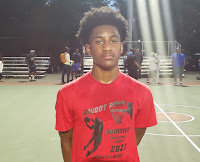 Noah Johnson Guard (Made Different)- Johnson shook off a tough start to made a few plays down the stretch. He had a few hard drives in the 4th quarter and either dropped a dime or scored a bucket. His squad needed him to handle the pressure in the closing minutes. 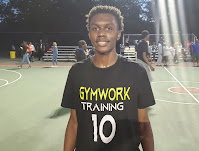 DJ Snead Guard (Gym Work)- Snead made his Moody Park debut and had a spark in the park. The southpaw played with urgency while scoring going to the cup and the mid range area. I also like how he was a menace on the defensive end collecting 6 steals. Snead has a improved handle and some shifty moves with the rock. Snead led his team in scoring with 20 markers 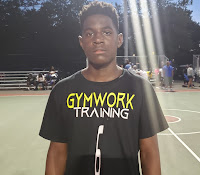 Joel Cineus Forward (Gym Work)- Joel stepped up a in the second half. He showed good touch from the field and from the charity stripe. On defense he clogged the lane well and hit the boards for his squad. 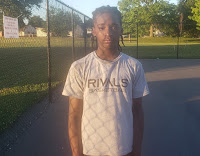 Zaquan Cullers Guard (NJ Rivals 2027)- Cullers led the charge in his team’s victory over the Timberwolves. The strong guard makes his money charging the lane and either scoring or getting to the charity stripe. Cullers led all scorers with 16 points.

Santana Hodge Guard (NJ Rivals 2027)- I love the way this point guard is developing. He’s crafty and he sees the floor well. Hodge toughness stood out as he drove the lane and absorbed contact while making plays. He finished with 10 points a bunch assist.

Sean Turner-Savage Guard (NJ Rivals)- Turner-Savage played with confidence when I watched him. He had crisp dribble drives and tough finishes. He also showed some court vision. His difficult twisting layup in the closing minutes had the crowd going crazy. He also finished with 10 points. 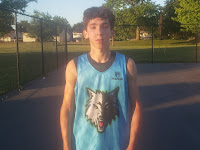 Johnny Feldman Guard (Timberwolves)- Feldman can score the rock from the outside and the midrange area. I like how he drives the ball and gets things done in transition. He also showed some toughness in the hostile environment of Moody Park.
Posted by basketball spotlight at 10:21 PM