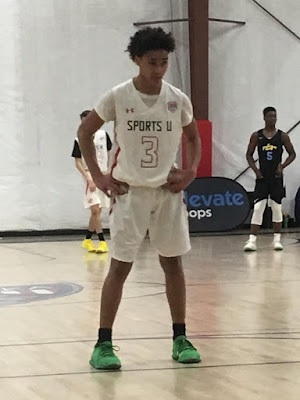 Elliot At A Recent Tournament

I can’t believe I have written this for 8 weeks. It has been great to share my life with you! Big thanks to Bball Spotlight for picking me to share my basketball life with you. This week I had no school, we had a break.

Throughout the week I studied and went to a few high school games to watch and support. I got to sleep until 11 am every morning and it was a relief because it was the first time that I’ve done that in a while. We work so hard on our game every week in school so, this break was great for my body.

On Friday I had practice with my team to prepare for the Proving Ground tournament on Saturday. Even though it is great with a break for your body it did show that I had been resting. I felt very stiff because I didn’t practice all week. My knees were hurting and I could barely run. During the practice we just went over plays and got shots up.

On Saturday the first game was against SK Elite and we beat by 9. My legs were still really stiff and I struggled to run up and down full speed so I didn’t do too well. The next game was against Team Final. I stretched out before the game thoroughly so I could run during that game. We ended up beating them by 2 points. After that game I went to Kean University to watch the Union County finals. First the girls and The Patrick School team won! Next was the boys finals which was The Patrick School vs Roselle Catholic. RC won the game but it was fun to watch because the game was close the whole time. Then I went home to sleep to be ready for the Sunday games at Proving Grounds.

On Sunday we only had one game which was against East Coast Elite Rivals and we won by 6 points. Tomorrow we are back in school and I can’t wait. It will be great to be back to working out. Especially since next weekend is the Play Off weekend for MADE Hoops. I will train hard to get ready for that. I also want to let you know that even though I didn’t got to Sweden for the tryouts for the 15 U Swedish National Team, it looks like I will be invited to train with them this summer and get a chance to be on the team next spring when they start playing. This is such an honor and I have to pinch myself to believe that I will be able to play on a National team.

It has been great to share these months with you! Thanks for following my journey. You can continue to follow what i do on Instagram @rf.ellio I am sure I will see you all at this springs tournaments or maybe at a camp this summer.

For the last time - Elliot out
Posted by basketball spotlight at 7:20 AM