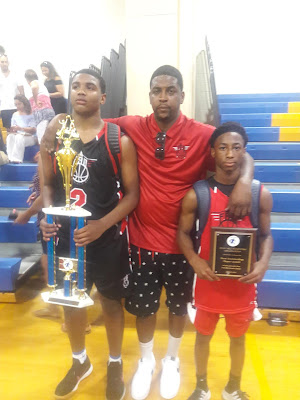 The F.A.M Outreach All Star Games took place in Lawnside, NJ and Basketball Spotlight was in the building for the action. The third contest was outstanding as the Red Team defeated the Black Team 111-108 in overtime. Here are the top performers from the event. 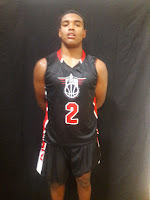 MVP- William Norman Forward (Black Team)- Norman had the performance of the year yesterday. He started the game on fire and didn’t let up on his way to 48 points. He knew where his bread was buttered as he carried to defenders to the cup and converted. He also operated with great precision on the blocks. He was literally unstoppable and was determined to get MVP and got it done. Congrats young fella you had a huge day yesterday. 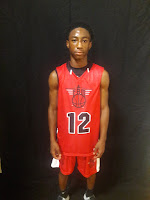 MVP- Rashan Locke-Hicks Guard (Red Team)- The brash scoring guard used his quickness to get buckets all afternoon. He was a blur driving the lane and in transition. His change of direction was a problem for defenders. Locke-Hicks scores in bunches on his way to 33 points. Good luck trying to stay in front of this youngster. 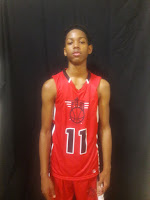 Rahmir Barno Guard (Red Team)- Barno might be the best lead guard in the tri-state rising 8th Grade class. The wiggle in his game is superb as he makes defenders vanish when he has the rock. He also was able to score from all three levels. Once he isolates a defender they are at his mercy. I love his crossover and finishing around shot blockers. He finished with 20 markers. 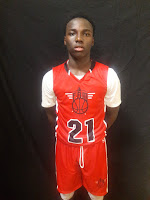 Michael Zaire Paris Guard (Red Team)- The shot blockers felt Paris frame all day. The strong built guard attacked the rim and used his body to shield defenders. This technique worked and he tallied a team high 34 points. This kid went hard from buzzer to buzzer. 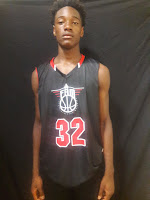 Malik Bowman Forward (Black Team)- The Maryland product showed glimpsing of why he’s considered one of the best in America. He finished above the rim on a few occasions and ran the floor like a deer. His handle and play making ability continues to show improvement. He also showed some range on his shot. He finished with 20 markers in the contest. 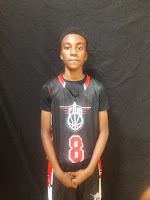 Anthony Robinson Guard (Black Team)- The kid from Florida was a total joy to watch. He got where ever he wanted on the floor and the defense couldn’t speed him up. I like his mid-range pull up game especially off the bounce. His battle with Barno was the talk of the game. Robinson ball handling will take him a long way in this game. 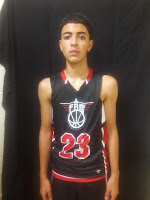 Deywilk Tavarez Guard (Black Team)- I like the size, court vision and jumper that this kid possesses. He’s able to see and pass over the defense and uses his solid frame to absorb contact when driving the lane. His confidence stands out when he on the floor.
Posted by basketball spotlight at 9:33 AM