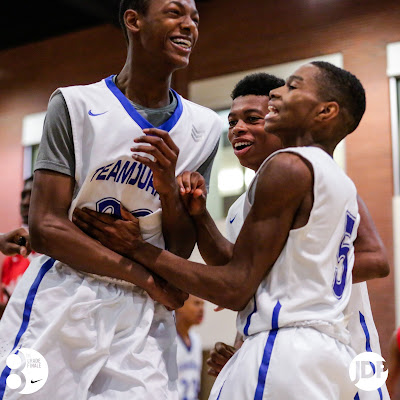 Welcome to my 4th journal entry for Lou Hutchinson.

My Basketball Background: Born 3/20/2004, 6’3” Point Guard/Shooting Guard for Team Durant. Attending the Maret School for high school and will be playing for Varsity Coach Chuck Driesell.


Monday: On the morning of the 9th I woke up around 10 am and ate breakfast and later lunch. After lunch I started to pack for the eighth-grade finale in Augusta, Georgia. I then went to the gym with my Dad to get shots up and prepare for the NIKE MADE EYBL 8th Grade Finale in Augusta, Georgia for 2 hours. Once we were done and came home I iced my knees, took a shower, said my prayers and got in bed.

Tuesday: On the morning of the 10th I woke up around 1 pm and had a large meal as my breakfast/lunch. Once I finished eating I finished packing, had dinner and took a nap before going to get on the Team Durant bus at 1 am Wednesday morning for the trip to the NIKE MADE EYBL 8th Grade Finale in Augusta, Georgia.

Wednesday: On the morning of the 11th we waited for on a bus to Georgia that was supposed to be there at 1 am but it arrived at 3 am. Once we got on the bus it was a 10 hour ride and I slept most of the way. We got to the gym (Augusta Convention Center) about an hour before our game and beat Carolina Legend by 18 in our first game of the tournament. After that we took the bus to the hotel, and once I got to my room I took a shower, said my prayers and went to bed.

Thursday: On the morning of the 12th I woke up around 7 am and ate breakfast. After that we took the bus to the gym (Augusta Convention Center) where we played Team Dez (Memphis United) and won by 15. After that game we waited to play our second and final game of the day vs Alabama Fusion. In that game I hit the game winning shot in overtime. I had been put in that situation multiple times in the past and was able to come through, but it was such a great experience to deliver it in the NIKE MADE EYBL 8th Grade Finale for Team Durant and my teammates! Once both games were over we got dinner and I took a shower, said my prayers and went to bed.

Friday: On the morning of the 13th I woke up around 7 am and ate breakfast. After that we took the bus to the gym where we played Nightrydas who ended up winning the tournament. They blew us out but we could still go to the bracket if we beat Team Final that night. That night we lost to Team Final and were out of the tournament finishing 3-2 and coming in 3rd out of six in our Pool.

Saturday: On the morning of the 14th I woke up around 10 am and went with many of my teammates to the 7th grade Durant game where they won off a buzzer beater from half court. We then went to their second game that day vs CP3 where they won on another buzzer beater but instead of a three it was a layup. Then all teams 14U through 16U went to the 7th grade Quarter Final game. They lost in double overtime by 1 and after that game we went back to the hotel, I took a shower, said my prayers and went to sleep.

Sunday: On the morning of the 15th I woke up around 6:30 am and packed my things to get on the bus for a 10 hour ride home from Augusta, Georgia to Upper Marlboro, Maryland. I slept most of the way home and arrived home around 6 pm. I then came home put my stuff upstairs got some food, said my prayers and went to bed. Overall it was a solid week and a strong experience both on and off the court with my teammates. I loved being able to meet KD and shake his hand. I loved making an overtime winning shot and being put in that position and being trusted by my teammates to deliver! KD is a great example for all of us who want to deliver in the moment under fire!!!!!!


Posted by basketball spotlight at 11:56 AM