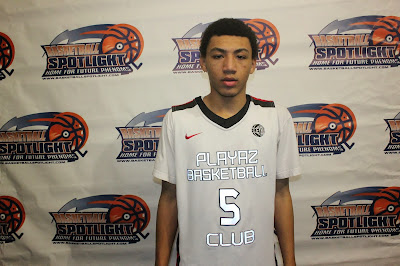 The Basketball Spotlight 8th Grade Division of the Tip Off Classic was loaded with talent. Here’s Part 1 of Top Performers from this weekend.

Jahvon Quinerly Guard (Playaz)- Wow, Quinerly started the season with a splash. The combo guard had his best outing against his former "Supreme Team teammates". Jahvon scorched Team IZOD for a game high 28 points including four deep treys. He had his all-around scoring game going. He finished at the tin, lit up the mid-range area and as mentioned earlier struck from behind the arc. He was by far the top overall performer of the weekend while leading them to the title. He heated up to the highest point that’s why his new name has to be Jahvon “Inferno” Quinerly.

Ja’Quaye James Guard (Playaz)- James received preseason acclaim with his play in other events but this was my first look at him running the Playaz Basketball Club. The ultra-quick point guard showed the flair for the dramatic by converting on three game winning buckets including two in the final seconds. He split the defense at will and seemed to set the tempo. He definitely has the keys to this high powered engine. It should be exciting him rock.

Justin Winston Forward (Playaz)- It was good to see Justin back on the floor healthy and he produced heavily. His best game was an explosive outing against the Rens which he tallied 25 points. He shows the versatility the make scouts love his potential. He hit the glass as the primary big man but also stepped out on the perimeter and showed some range. I would like to see him retool the form on his outside shot which should come in time.

Tavon Jones Guard (Playaz)- The first showdown with IZOD took a lot out of Quinerly and James so Jones stepped up during the semifinals against Team Final. The natural slasher showed a quick first step that he used to breeze past defenders. When Jones outside shot was falling he was even more dangerous. When his game is on it makes it even more difficult for the Playaz to lose.

Luther Muhammad Guard (Team IZOD)- This was my first look at Muhammad this season and he was impressive especially with his offensive improvements. He’s making the transition to point guard and though he’s a work in progress he showed good strides especially in transition. I also have to give kudos to his mid- range pull up which keeps the defense honest and makes it easier for him to finish at the rim. On defense he's still the guy the opponent's top gun doesn't want to see.

Tyrek Chambers Guard (Team IZOD)- Chambers was primarily a spot up shooter last year but now he has got his driving game together. His handle has got tighter and he looks to be on better shape. This weekend he finished through contact and used the floater to avoid shot blockers. He must pick up the scoring void left by Quinerly.

Atiba Taylor Guard (Team IZOD)- It was Taylor’s first outing with his old team and he wasn’t spectacular but he had his moments. I like the fact that he was willing to do other things including rebounding inside. He also seemed to be comfortable sharing the point guard duties with Muhammad. All in all he still was able to make good basketball plays to help his team reach the finals. I see good things once he back in the rhythm with IZOD.

Shack Dezonie Forward (Team IZOD)- It was important for Shack to make the transition to the wing and he looks to be headed in the right direction. He was in a comfort zone when handling the rock and making decisions. He used his new skills to set up scoring opportunities along the baseline and in the lane. He also banged home a few outside shots. He needs now to work on moving he feet on defense so he can guard the wing position.
Posted by basketball spotlight at 2:47 PM