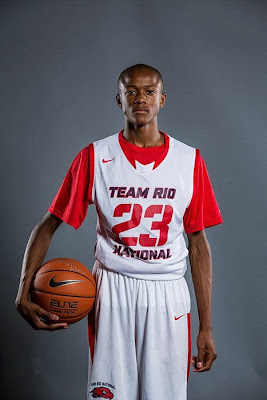 The 7th Grade Division of the Basketball Spotlight Tip Off Classic had talent galore. Here’s our Part 1 of the top performers.

Scottie Lewis Forward (Team RIO National)- “The Show” started out a little slow in his first outing as he was surveying the Spotlight scene. But once he got comfortable the region saw the talent that I have been talking about. Lewis ran the floor like a deer, displayed a real pull up jumper, was a shot blocking menace on defense and gave the crowd a treat with a few thunderous dunks. His motor is something special especially for a 7th Grader and many spectators left this event singing his praise. This kid really has a bright future.

Jordan McKoy Guard (Team RIO National)- “The Real McKoy” looked to be in mid season form and fully recovered from his injury. He filled the lanes in transition while also helping out on the glass. He continues to be a matchup problem on this level with his combination of size and skills. His scoring punch will be needed as RIO tries to take the country by storm.

Bryan Antoine Guard (Team RIO National)- Yes, Antoine has arrived. In the past he was counted on to carry the full load now he has settled into his new role. This weekend he lit up the scoreboard from deep and while driving to the cup. In transition he was too difficult to contain as he maneuvered for buckets. He gives this team that deadly third scorer they need.

AJ Hoggard Guard (Team RIO National)- The pg is loving all his weapons this year. He’s pushing the rock quicker these days and dropping dimes like a snitch. Against DC Assault he was able to get into the lane and either score or drop off the pill. I’m sure he has the ability to keep all these youngsters happy.

Jalen Gaffney Guard (Team RIO National)- Gaffney came up big when RIO’s needed him the most. They were in a serious semifinal dogfight with Rens and the combo stepped and delivered 18 big points including 3 treys. I also like the way he helped out with the point guard duties at times. His play in the semis propelled them into the finals.

Terrence Williams Forward (Team Takover)- “Big Smoove” best outing came during their semifinal match up with CIA Bounce. The talented forward had a huge outing dropping in 22 points and helping them advance to the finals. When Williams is totally clicking there’s not many in the country that can slow him down. 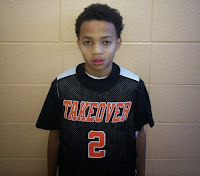 Tyler Brelsford Guard (Team Takeover)- Brelsford also came up huge against CIA Bounce with a good floor game including 12 points. He ran the show as usual and even clipped rival DC Assault for 19 markers in their pool play matchup. Good showing for the young pg.

BJ Joyner Forward (Team Takeover)- Joyner is a new addition to this crew and made his presence felt. He’s strong as a bull in the lane but can also use his touch to score in traffic. His presence frees up Williams to do other things which increases his production.
Posted by basketball spotlight at 10:12 AM