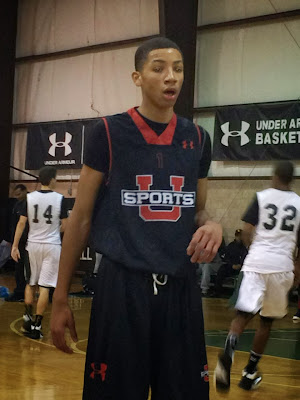 Atiba Taylor At The Tip Off Classic

So, this week was very busy for me. I had a lot of homework and studying to prepare for my tests and quizzes. I’m really trying to keep good grades and stay on top of my classwork because I know that the NCAA requirements have changed to a minimum of 2.5 GPA to receive an athletic scholarship. My basketball schedule is: Mondays is chill day. Tuesdays and Wednesdays I go to my basketball trainer and on Thursdays and Fridays I practice with my AAU team. Most of the time we play on weekends, if not we practice.

This weekend was my team’s first tournament of the season. We played in the ‘BBallSpotlight Tip Off Classic’, which was very competitive. We competed against some of the best teams in our region and I believe we did pretty decent. A lot of teams have been playing since September and we only had three practices to prepare for it. We added two new players and as a team we’re still trying to get back the chemistry we had last season. Chemistry isn’t something that happens overnight, its something you get over time. I got a chance to play against two of my friends (Brandon and Myles) in the semi’s, from “Team Takeover’. We’ve been going at it since the 3rd grade and we always have tough battles but this time we got the “W” to take us to the championship game against ‘The NJ Playaz’. It was a close game, we were tied at halftime but we didn’t play well at all in the second half and ‘The Playaz’ took it from us. We will use our “L” as a learning experience for us to get better. We are “Team Izod”, we will bounce back from this and be more prepared.

A lot of people are always talking about basketball rankings, luckily, I’ve been ranked on many basketball sites and that’s cool but it really doesn’t mean anything! On most sites I am ranked #1 or #2 PG in the country but I am just happy that people know my name or who I am, which is more important than anything. I really appreciate sites for noticing me but until you’re ranked on Rivals or ESPN it’s not official, hopefully, I will be one day! One thing I’ve noticed is regardless of how good I play its never enough. People don’t care about me leading my team to get a win or how many assists or rebounds I have, they only care about points and the game is much more than that. I can hear people in the crowd saying things about me but because I have an “X” on my back they expect me to be Superman every time I touch the ball. I’m only a 14-year-old kid still learning the game like everybody else. I’m built for the pressure so it doesn’t bother me what people say or think…I JUST LOVE THE GAME!


Posted by basketball spotlight at 8:22 AM