Inside The Tip Off Classic 8th Grade: Don't Hate The Playaz, Hate The Game! 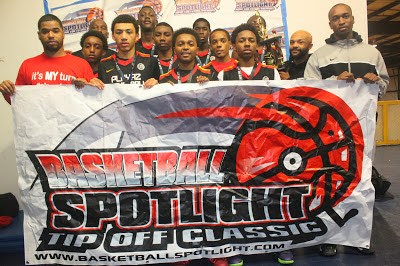 The Basketball Spotlight 8th Grade Division of the Tip Off Classic was quite a treat. Now here’s our look at the interesting stories inside this age division.

Playaz Get It Done!
The Playaz Basketball Club entered the Tip Off Classic with the most pressure and answered the bell. They defeated some of the top teams in the country including regional rival Team IZOD twice. They have some serious weapons and should only get better as the season progresses. They will definitely be #1 when our new rankings come out and are still our favorite to win the Grand Finale Crown.

Team Final?
Yes, the surprise of this division had to be Team Final. The Philly based squad defeated Team Scan to advance to the final four before losing a close battle to eventual champs the Playaz Basketball Club. I like some of the new pieces they have added and we look forward to seeing them again.

Tough Tides For Cali!
A few years ago a dynamic Cali Style squad came to NJ and took the Clash For The Cup by storm but the 2013 edition (I 10 Celtics) didn’t have the same results. They lost tough games to the Playaz and Team IZOD in that shark tank White Division. We look for them to be out for blood when they return in February for the Clash For The Cup.