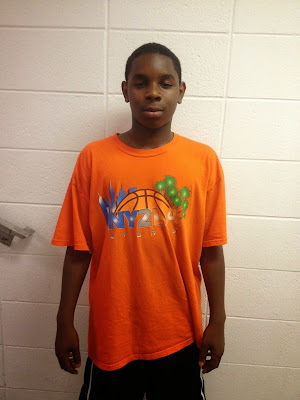 Chicago is known for their hardcore guards and players making their name on the blacktop. Now the top 7th Grader in the state Marquise Walker will be looking to carry on the legacy. Walker spent last season mostly playing up in grade for George Hill All Stars but we did get a glimpse of him at the 6th Grade Nationals. His played earned him the #16 spot on our Class of 2019 rankings.

His father and developer Chikosi Walker is impressed with his son’s package. “I love his court vision and creativity. Most guards can only pad their assist totals in open court but Marquise can get ten assist against a 2-3 zone” said Chikosi. Though his father likes what he sees in Marquise he does understand there’s room for improvement. “I think Marquise has to become more consistent in terms playing at a high level from start to finish. He also needs to stay focused regardless of the competition level and score of the game” he continued.

Marquise had lofty expectations since he was labeled a child prodigy at a very young age and his father feels he can still reach the ultimate goal. “Potentially I think he can be as good as he wants to be. Marquise has to stay focused on his ultimate goal of the NBA which will require him to work hard as possible. This goal will also require some luck. It’s too early to see where he stacks up against past Chicago guards but God willing through hard work he could be thought of as one of the best when it’s all said and done” he finished.

Basketball Spotlight looks forward to watching Marquise some more this season. We will keep you guys updated on his progress.


Posted by basketball spotlight at 12:18 PM