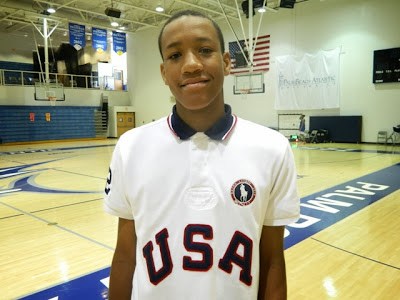 After the 5th Grade AAU Nationals three years ago EJ Montgomery seemed to vanish off the AAU scene. But nothing is further from the truth. The fact is the 6’9 playmaker actually played on the high school level since 6th Grade. Throughout his play this youngster has really developed his game for the next level and checks in at # 2 on our Class of 2018 Player Rankings.

His father Efrem Montgomery Sr. loves is son’s development but also sees the areas he needs to get better at. “I love the fact that he can make everyone around him better when he’s on the court. His size, court vision and play making ability makes this possible. I also think he needs to get better on the defensive end which is coming for most young players” said Montgomery Sr.

Standing close to 6’10 the 8th Grader has many analyst have EJ pegged as one of the next great ones and his father doesn’t differ. “EJ has a special talent on the floor that you can’t teach. I believe with hard work and dedication his potential could take him all the way to the NBA” he finished.

Basketball Spotlight will keep an eye on EJ Montgomery and keep you guys posted on his quest to his ultimate goal. Stay tuned as we bring you more top players from around the country.

Posted by basketball spotlight at 8:21 AM