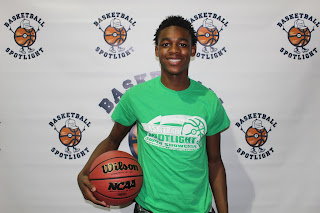 The Basketball Spotlight Super Showcase took place this past weekend and was loaded with talent. Here’s our second look at the some of the top 8th Graders.
Basketball Spotlight Super Showcase Top 8th Graders Part 2
Travis Upchurch Guard (Bridgeport, CT) – Upchurch was arguably the best point guard in attendance. He is very explosive with a quick first step. He has elite ball handling skills and can knock down the jumper out to the 3-point line. Travis is at his best attacking the paint or in transition. He is extremely hard to stay in front of which enables him to break down the defense on demand. He played with extreme confidence. 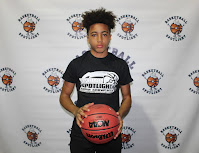 Naiim Parrish Guard (Manalapan, NJ) – Parrish is a crafty point guard that we believe has a bright future. He was a top 3-point guard in attendance because he could do it all. With an extremely high IQ he was very efficient and effective on both ends of the floor. Naiim showed his ability to drive into the paint and kick to open shooters and how he could finish at the rim through contact.

Jordan Pierce Guard (Bridgeport, CT) – Jordan was a big scoring guard that could really get buckets. He knocked down multiple 3 balls both off the catch and off the dribble. He was also able to blow by his defender and finish through contact when another defender tried to rotate over. We liked how he stayed aggressive attacking the defense looking to score in a variety of ways.

Jordan Ghee Guard (Totowa, NJ) – Ghee has been known as one of the better jump shooters around and he backed that up by knocking down multiple 3 pointers along with some mid-range shots. But what really stood out was his improved ability to create his own shot off the bounce. We saw him attack the basket more frequently than in the past and we loved his step back off the dribble. His game is progressing nicely.

Mekhi Ragland Forward (Orange, NJ) – Ragland is agile power forward with a great touch. He rebounds, runs the court and is great around the rim. He finishes through contact because he knows how to use his body to create space. We also love his soft baby hook and we saw him knock down a good looking 3 pointer. Mekhi is highly effective playing to his strengths.

Badara Diakite Forward (Elmont, NY) – Diakite is a long 6’8 forward that was the tallest player in attendance. He is remarkably effective on both ends of the floor. He rebounds and blocks shots defensively and offensively he can score the ball around the rim. We liked is aggressive nature and how he tried to dunk on his defender. We feel he has inches to grow and with continued development he will be a problem for opposing teams for years to come.

William Felder Guard (Willingboro, NJ) – Felder is an active guard that plays with a high level of energy on both ends of the court. We love how he locks up on defense getting steals and turning them into offense. Offensively he attacks the seams of the defense and finishes at the rim. He is also deadly in transition. Will’s style of play is what coaches need and want on their teams.
Posted by basketball spotlight at 9:58 PM