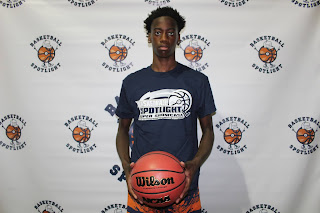 The Basketball Spotlight Super Showcase took place this past weekend and was loaded with talent. Here’s our first look at the some of the top 8th Graders.
Basketball Spotlight Super Showcase Top 8th Graders Part 1
AJ Dybantsa Forward (Brockton, MA) – Standing at 6’4 with long arms and the ability to be elite on both ends of the floor, Dybantsa was by far the best player and long-term prospect in the building. Looking like he will grow at least 3 to 4 more inches minimum we loved what we saw. He was dominate on both ends of the floor and we were extremely impressed how he willed his team to a victory in his 2nd game over a more talented team. AJ can do it all handling the ball, making plays for others, or getting a bucket for himself with range out to the 3-point line. We love his motor and energy as he plays hard every play. He was the Most Outstanding Player of the 8th grade group.

Jebron Harris Forward (North Brunswick, NJ) – Harris came to the Super Showcase with a big reputation to back up and he did just that. He is a combo forward that can play inside or outside. We loved his improved ball handling and great decision making when he grabbed the rebound and led the break either dishing to an open teammate or scoring himself. His jumper looked good out to the 3-point line where we saw him knock down a few. He also understands how to use his body and move people out of the way when finishing around the basket.

Deuce Maxey Guard (Willingboro, NJ) – One of the Top 5 Point Guards in the 8th grade age group, Maxey understands how to control the game from the lead guard spot. He can be a scorer, or a facilitator based on the needs of his team. He can get to the rack or knock down the long ball which we saw him make multiple threes during the event. He has crisp ball handling skills with well above average passing ability.

Judah Hidalgo Forward (Pennsauken, NJ) – Hidalgo is a long wing forward that is a very skilled player. He has a nice jumper from beyond the arc, but he can also handle the ball well enough where can blow by a defender his size or bigger and finish at the rim. If a smaller defender is on him, he can take them down to the post. We like his high basketball IQ. He got off to a slow start in the first game but when he got warmed up, he started really to be effective the remainder of the event.

Kevair Kennedy Guard (Philadelphia, PA) – Kennedy knows how to play the game. He plays hard on both ends of the floor. He seems to always be around the ball as he had multiple steals and we also saw him dive on the floor for a loose ball. He made a great one-handed pass off the dribble through the whole defense for an easy layup to one of his teammates. He also made a few great look ahead lead passes for easy buckets. Kevair can get his and score in bunches. He always makes the right winning play.

Tai Turnage Guard (Queens, NY) – Turnage is a slender guard that probably one of the most efficient and effective guards we saw because he plays to his strengths. He always keeps his dribble as he navigates the defense. He is a very crafty scoring guard that knows how to finish at the rim over much taller and stronger defenders. One of the best parts of his game is his elite jump shot that he knocks down from mid to long range at a high clip.

Tamarr Washington Guard (Cape Cod, MA) – Washington is a lightning fast point guard that is always putting pressure on the defense. From end to end he might have been the fastest guard with the ball in his hands. He can finish at the rim as he is always in attack mode or he can make the pass for the assist. He also can be a pest guarding the other team’s point guard. His motor is on another level.
Posted by basketball spotlight at 9:45 AM