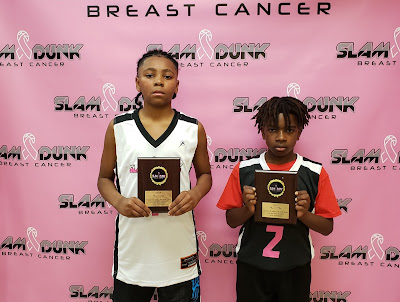 In the 5th Grade game of the Slam Dunk Breast Cancer, Team Success defeated Team Love 60-54. Here are the players that impressed us the most on the floor.

MVP Stetson Merritt Forward (Albany, NY)- The Jacket winner didn’t start but when he entered the game, he was unstoppable. Merritt ability to put the rock on the floor and create puzzles defenders on this level. The lanky forward used isolation to get to the cup and finished with ease with either hand. He finished with a game high 26 points including 3 treys. He has a bright future ahead of him as he adds another MVP trophy to his shelf. 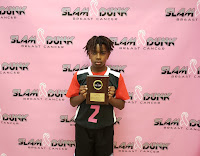 MVP Bryce Clark Guard (Lumberton, NJ)- I felt sorry for ball handlers trying to push the rock against Clark. He was a one man press as he stripped opposing guards at will. After collecting the steal Clark usually pushed the rock and created for himself or teammates. The south jersey product is a straight game changer.

Yasir Turner Guard (Philadelphia, PA)- Not many guards can stop Turner from getting to the hole because of his handle game. He combines quickness and an array of moves that gets rid of defenders. Once he gets to the cup he can finish with a floater or a layup after absorbing contact.

Tyler Sutton Guard (Philadelphia, PA)- After a slow first half Sutton went to work. Along with scoring Tyler showed he could actually set up teammates from a point guard position. He gets anywhere he wants on the floor with confidence and seems like a natural leader. I hope to see him on the AAU circuit.

Dominic Mauro Guard (Manalapan, NJ)- Mauro was ultra-aggressive from the outset. I like how he used a dribble drive to get past defenders and get to the hole. He also has a nice floater and ability to score in traffic. He has some toughness to watch out for.

Cam Spence Guard (Philadelphia, PA)- Another Philly guard that stood out was Spence. I like how he went hard in transition while maneuvering to the hole for buckets. He showed a nice touch and the ability to create space.

Kamden Jackson Guard (Newark, DE)- Speaking of transition, Jackson was tremendous in transition finishing off plays. He knows how to get out in front of the defense and receive the rock. Jackson went on a scoring binge early after his team went out to an early lead.

Semaj Stone Guard (Philadelphia, PA)- Stone is as smooth as they come. He can hit the jumper, score in transition and in the half court set. I like his production in this event and as he kept his good momentum going from the Future Phenom Camp.

Shaun Munson Guard (Philadelphia, PA)- Munson crossover dribble and make defenders vanish. His quickness allows him to enter the lane and make things happen. I like his floater game and court vision in terms of looking for teammates.

Andre Robinson Forward (Burlington, NJ)- Robinson is a difficult guard because of his size and ability to put it on the deck. Robinson showed he could score in a various of ways. On defense he maintains the paint while hitting the glass and altering shots. He finished with a team high 15 markers. 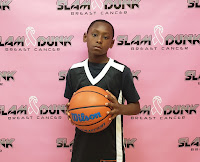 Jamar Young Guard (Trenton, NJ)- Young represented the Capital City by attacking the rim and scoring on defenders. The lefty plays with a pit bull type mentality and doesn't fear any comp. On defense he moves his feet well and doesn't mind pressuring the rock.
Posted by basketball spotlight at 2:10 PM