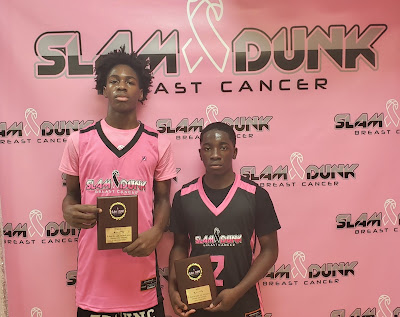 In the 8th Grade game of the Slam Dunk Breast Cancer, Team Courage defeated Team Faith 94-87. Here are the players that impressed us the most on the floor. 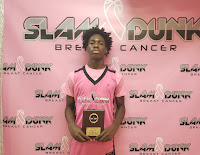 MVP Ian Jackson Forward (Bronx, NY)- This MVP selection was easy as Jackson compiled an event record 36 points in their victory. Most of Jackson’s buckets were in transition as he finished at and above the rim often. Jackson is the prototype slasher with nice size and athleticism. He understands how the feel the lane and go straight to the tin. He was just coming off a Top 6 finish at the Future Phenom Camp. 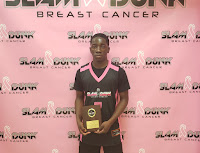 MVP Kabrian Goss Guard (Trenton, NJ)- “The Boss” was on fire at this event he faced some tough guards on the other side and brought out his full arsenal. When his trey ball is dropping, he’s more dangerous. He nailed about four treys while also beating defenders off the dribble with quickness and crafty dribble moves. He seemed to have everything clicking.

Tahaad Pettiford Guard (Jersey City, NJ)- If there’s a guard more confident than this kid point to me to him because Pettiford swag is on 10. He talks the talk and walks the walk at same time. His hesitation dribble kept defenders at bay but also had the trey ball dropping. He knocked down 4 treys and finished with 20 markers.

Terry Copeland Forward (Orange, NJ)- Copeland made his Spotlight debut and had some impressive moments. He ran rim to rim scoring and blocking shots. He is still in his developing stages but you can’t deny his size and strength. A lot of high school teams will be looking for his services. He finished the event with 20 markers.

Toby Ojukwo Guard (Sicklerville, NJ)- Toby was very aggressive from the start. He uses angles to attack while using his body to shield shot blockers. He has point guard instincts but really loves to score the rock. He had a dozen points while helping his team come away with the win.

Dylan Seay Forward (Brick, NJ)- Seay had the tale of two halves. He was quiet in the first half with 5 points but exploded in the second half for 23 markers. Dylan started dropping the trey ball and attacking the rim. His smoothness was on full display and we continue to be a force to be reckoned with. Check him out for Team Final and Diary Of A Baller.

Jaylen Clagett Guard (North Brunswick, NJ)- Clagett was very impressive in this event. He had the floater game working and slashed to the basket while scoring. He was very aggressive and was playing with a difference being that his mother recently died of this disease. She is looking down and proud of his performance.


CLICK HERE FOR THE DELSON COMBINE
Posted by basketball spotlight at 12:32 PM