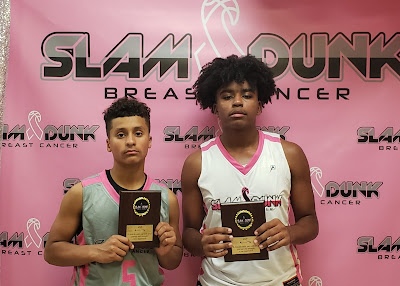 
In the 7th Grade game of the Slam Dunk Breast Cancer, Team Blessed defeated Team Pride. Here are the players that impressed us the most on the floor.

MVP Jebron Harris Forward (North Brunswick, NJ)- Since 5th Grade Harris has been collecting MVP honors are nearly every event. It’s heard to vote against him because his game is dominant and not of the bully style. Harris can score on the blocks but also showing a smooth transition on the wing. He led the entire game in scoring while helping his team get the win. He finished with 17 markers. 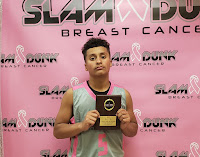 MVP Richard Rosa Guard (Pequannock, NJ)- Rosa won MVP honors pushing the rock and scoring while also getting his teammates involved. Rosa missed the Future Phenom Camp so he was eager to get going at a Spotlight event. He scored points in transition and kept defenders on their heels. He finished with 13 points in the loss.

Peter Mauro Guard (Manalapan, NJ)- Mauro made a strong push for the MVP honors with an all-around floor game including 14 points. He scores in bunches and has a nose for the bucket. One thing is for certain is that Peter will attack with everything he has. We look to him to have a huge season on the circuit.

Tai Turnage Guard (Queens, NY)- Tai “Turn Up” was at it again. He dazzled the crowd with a superb dribbling moves and get past defenders with ease. He passing ability was on full display while also being able to score. I also saw that he added some inches to his frame in height terms. He should explode this season with the Gauchos.

Mekhi Ragland Forward (Orange, NJ)- Ragland was a problem inside on both ends of the floor. He scored inside gathered rebounds and altered a few shots. Mekhi loves showing his ball handling skills and extended range. King Street Kings will gladly display Ragland on the circuit.

Chidi Nwigwe Guard (Monroe, NY)- Chidi plays both guard positions with smoothness. He can operate by passing the rock or scoring. He has tremendous size and lanky limbs which indicates more growth ahead. He rocks with his hometown Monroe Crusaders.

Judah Hidalgo Forward (Pennsauken, NJ)- Hidalgo was in MVP conversations as he put together a good floor. He has moved to the wing and looks very comfortable creating. He had double digits scoring and snatched several rebound while giving a few assists. He has switched over from We R 1 to Team Final.

Isaiah Skinn Guard (East Orange, NJ)- The lefty led the camp in scoring and continued this momentum into the Slam Dunk Breast Cancer. He has unique quickness and uses good body control when finishing at the tin. He can get it done from all three levels. He is wired to score and will be helping a Jersey squad this season as he has moved from the DMV area. He finished with 12 markers.

Manuel Castro Forward (Elmont, NY)- I love how this kid gets at it. Castro plays both ends with extreme intensity. He is also a southpaw and can get it done from the baseline and filling the lanes on the break. Castro also will stick his head inside for a few rebounds.

DJ Snead Guard (Bensalem, PA)- Snead started out a little slow but his production picked up and he showed his two ability on the floor. He’s capable of putting up numbers in bunches and being a pest on the defensive end especially in the passing lanes. He finished with 12 markers.

CLICK HERE FOR THE DELSON COMBINE
Posted by basketball spotlight at 9:48 AM