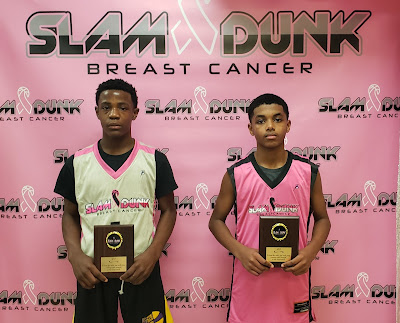 In the 6th Grade game of the Slam Dunk Breast Cancer, Team Survivor defeated Team Love. Here are the players that impressed us the most on the floor.

MVP Jalen Grant Guard (Elizabeth, NJ)- Grant came for the hardware and got it. The North Jersey prospect lead his team in scoring while also showing a complete floor game. He penetrates at will but will also kill you with the deep trey or pull up off the bounce. He has the potential to be a national recruit one day.

MVP Jordan Skyers Guard (Middletown, NY)- Skyers was once again tremendous as he carried to the scoring load for his squad. His poise, power and scoring prowess sets in apart from many of his competitors. He can score in a variety of ways and will punish anyone that stands in his way. His trophy shelf is filled with Spotlight accomplishments.

Bryce Presley Forward (Bensalem, PA)- If Presley continues to grow and progress Bucks County will have a young stud on the horizon. I like how he runs the floor and finishes well but what really impressed me was when I saw him handling the pill himself. Keep a great eye out on this kid.

Alex Mazella Guard (Mahwah, NJ)- The MC kept referring to the Hurley brothers when watching Alex rock. Mazella had the drive, draw and dish game together as well as knocking down the outside shot including the trey ball. When he hitting like that he’s tough to guard. He finished with 11 markers. 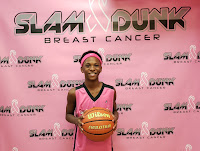 Nasir Ralls Guard (Philadelphia, PA)- Ralls is a nice size point guard that surveys the floor and can score. He used his craftiness and feel for the game to make things happen. He’s too big for most point guards on this level to check him. We will see him on the circuit with Fidonce the year.

Nolan Barnes Guard (Philadelphia, PA)- Don’t let the size fool you as Barnes stays in attack mode and will kill you if you don’t watch out. He constantly beats defenders off the bounce and breaking their ankles in the process. He was a joy to watch. He scored 14 points in the win.

Malik Hughes Forward (Philadelphia, PA)- I seen this movie before and he goes by the name Donte Scott. Hughes like Scott at this age is still growing into his body and you can see the potential oozing. He has good hands and touch. On defense he is also a force.

Elijah Thenor Guard (Teaneck, NJ)- Thenor caught fire from deep as he drained 3 treys in their win. Elijah is known for knocking the long ball along with his ability to create. He finished with 11 points in the win. Look for him rocking with Playtime Panthers.

Kahseem Bronzell Guard (Philadelphia, PA)- One thing about Bronzell is he stays in attack mode. His ball handling allows him to bypass defenders and use his athleticism to finish. Down the road he has chance to be something special in Philly.

Sammy Jackson Guard (Philadelphia, PA)- Jackson put up some numbers at the game. He is known for shooting jumpers but also showed some other tools in his arsenal. He has an in between game and can finish at the cup. He finished with 15 markers in the loss.

CLICK HERE FOR THE DELSON COMBINE
Posted by basketball spotlight at 7:51 AM