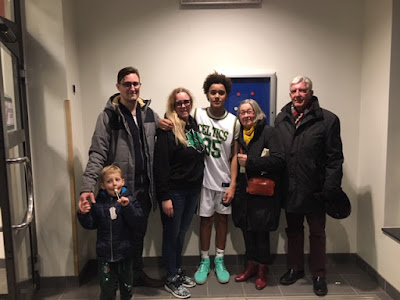 Elliot and Family In Sweden

This past week was a great week!


On Monday, I was tired from the 8 hour flight. But when we arrived to Copenhagen we went to Tivoli, an amusement park, and the team had a great time. I slept in a room in Denmark with two of my teammates and they both snored so it was hard to sleep. I woke up and had to rush out of the hotel to take a train to Sweden. The ride was only about 15 minutes across a huge bridge. Once we got there we dropped our stuff of in the place that we were sleeping, and went to a gym for a team scrimmage against a team in Lund, Sweden. We scrimmaged for about an hour, took a shower there, and ate dinner with the team that we played against. They were at The Patrick School this past summer so it was great to see them again. There was a reporter interviewing us as well. 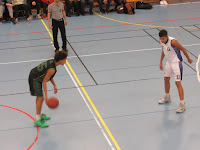 On Tuesday, I woke up really early and went to the gym. My first game in Lundaspelen was on The Basketball Academy @ The Patrick School’s 16u and we beat the team by a lot. They had really tall kids but that made it easier for our quick guards to score on them and it created mismatches. After we beat that team by 20 I had a game with 15u. We killed that team also. There was an article in the paper about us from the evening before. It was great to see us being in the newspaper in Sweden.

Wednesday and Thursday we kept on playing pool play and went undefeated in every age group. We played teams from Denmark, Russia, Sweden, Germany and other countries from around the world. It was great to play against some of the top ranked teams in Europe and still win. Some of the games were packed until people couldn’t get in because they all wanted to see us play. We were the first American team to every play in the tournament.

On Friday, the playoffs started. 14u and 16u both had games at the same time so we had to split the kids 7 and 8 because there was only 15 kids. 16u lost because we didn’t have 4 of our starters but the 14u team won. The 16u game that I played was crazy. Every kid on the opposing team was over 6 foot and there big man was about 6’9. The game was packed and everyone was screaming when I was dunking in the layup lines. During the game the crowd was hectic and very loud. We lost that game, but after kids wanted pictures with me and some of my teammates. A lot of people were lining up by the door just to give us high fives as we left the gym. The love from the fans was crazy. 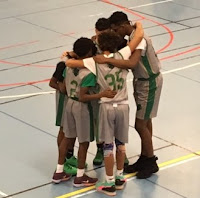 On Saturday, I watched 14u win the championship because my team lost in the playoffs. They won by 30 and got a huge trophy. After that we traveled to another city in Sweden called Malmo and had a couple of hours to walk around. Explore, and try foods. We ended the trip at a restaurant called, Elysee where they serve Fondue. It was a fun way to end the trip sharing a fun experience where you cook your own food with my teammates, the coaches and the parents.

On Sunday, we woke up early and took a flight back home. I was really tired as I had played 9 intense games in 4 days. I learned a lot during this trip but the best thing was to go on the trip with my friends and teammates and all the love we got from the fans. Now I have to get back in the gym and train! Good thing I train a lot at school every day.

Elliot - Out
Posted by basketball spotlight at 9:46 AM