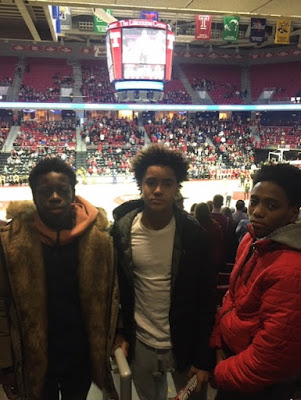 Elliot and Friends At Temple Game!


On Monday, I was really tired from the 8-hour flight back from Sweden but I still had to wake up for school. School was fun, I saw all of my friends again after a 3 week break and we showed them the trophy we got from Sweden. My legs were hurting all day from the trip but I had to push through all of the workouts we had. At the Academy we have 4 work outs a day. Two on court (one with Delson and one with Coach Tarik) and 2 fitness work outs (one speed & agility and one strength & conditioning). 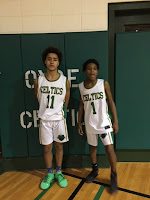 On Tuesday and Wednesday, we took our midterms exams so I had to study for those both Monday and Tuesday. I did well on the exams and that feels good. Our school season started this week and since we have over 40 players in the Academy, we have 4 teams so there are basically games every day. On my team I have my friends Tahaad Pettiford and Jalen Mayo. It is great to get to play games with my school mates because we train together all the time.

On Tuesday right after school I watched one game at the Kyrie Irving Family Court. At all home games we have a concession stand so I helped out there as well. On Wednesday I went to an away game to watch another one of our teams. 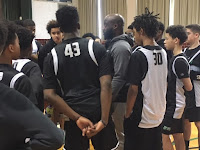 On Thursday after school, my team finally had our first game. It was great to finally put on the TPS uniform again. I had double-double with 28 points and my team won by 60!

On Friday, after school I went to watch another one of our teams play Linden Middle School. It was intense game but the Academy team won. All four teams won all their games this week. After the game I went home and finished some school work I had to do over the weekend. Tahaad and my friend John came and slept over.

On Saturday we drove down to Temple to go watch Nate Pierre-Louis and the rest of the Owls play. The game went to overtime and Temple won by 2. We picked up posters and t-shirts on our way out and we had to rush back up to NJ because we had IZOD practice at 6:30. Tahaad stayed with me Saturday night too.

Sunday, I slept in again and took it easy all day. At 6 we left for another IZOD practice. I really look forward to all the IZOD practices because the IZOD team from when I was in 4th grade is back together this year.

Tomorrow, (Monday) we have another game after school and this week I have to get ready for MADE Hoops next weekend. I can’t wait to write next entry and tell you about the MADE Hoops weekend.

Elliot - out
Posted by basketball spotlight at 12:22 PM