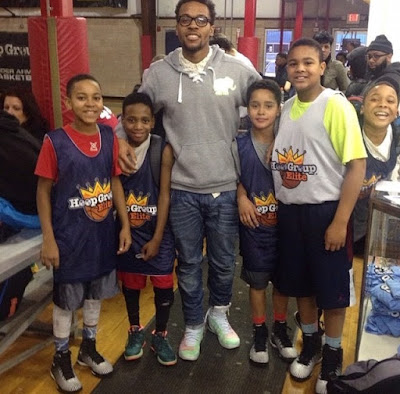 This past week I work the hardest I could in the gym and in the classroom. The whole week me and my team mates worked hard and pushed each other because we didn't want to go to BballSpotlight and lose again! I have two teammates in my school, Tahaad and Maurice, and many more of my classmates were going to the tournament so it was a week we all stepped up.

We were off on Monday and after that it was all preparation for the weekend. I take competition very seriously and I want to be ready. I didn't just prepare during work outs I also prepare through getting enough sleep, eating right and getting extra calories and nutrition.

On Saturday we had a 10 o'clock game against Riverside Hawks. We won that game by 15. Our next game was against New Heights and we came out really aggressive because we wanted to show that we are the best Under Armor team on the circuit. We also won that game with 15. I went back home to rest and get ready for Sunday.

Our first game on Sunday was against Team Diffrnt. The game was loud and packed. It was a close game until the last few minutes, every play counted. We won that game and were undefeated in the pool and moved on to the play offs.

The semifinals were against the NJ Bulldogs. The game was really close and really loud. I was in foul trouble most of the game so I had to sit out. Luckily, we have elite guards that can sub in for me at any time. We ended up winning that game and moved on to the Chip.

In the Chip we played Team Final. I was exhausted from all the intense games before but I had to push through. It helped that I got some great protein in between the games and stayed hydrated. Th game was very intense, it was close game the whole game. In the final minutes we were down but we worked really hard on defense to get stops. The last play we were down by one, I dished the ball to Tahaad for the game winning shot. We won!

My teammates and I have worked hard for years, and stuck together through ups and downs. It is really great to be back with the original team, that we started in 4th grade, and be able to win a tournament like this with them.

As I told you last week, I had a big decision to make. I was invited to a training camp in Sweden to try out for the National Swedish team (I am a Swedish citizen too). I really wanted to go but there was so much that was hard to work out that I had to say no and hope that I can make it next year. I have now sent in my films to them and hope that maybe, maybe they will pick me for the team even though I can't go for the training camp. It would be such an honor to play for Team Sweden! I'll keep you updated if I hear from them!

Elliot - out
Posted by basketball spotlight at 1:45 PM