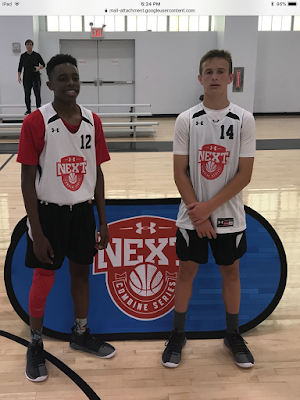 Welcome to my 8th and final journal entry for Ben Roy.

Monday: School was easy because now all we were doing was practicing for graduation. After school I decided to come home and chill for a bit and work out later. I headed up to I’m Possible later that night. It was a small class so I got a ton of reps in and it was good work.

Tuesday: Tuesday was field day at our school so all we did was play games all day long. It was really nice out so it was good to be outside all day. After school I decided to go to the beach with some of my friends. It was good to chill out with the boys and catch up. Later that night I went up to the park and shot around and worked out for about 2 hours on my own.

Wednesday: Wednesday was a very long day. Since graduation was the next day, all we did was practice what to do at graduation. Although it seemed fun to miss all of my classes, it really wasn’t fun practicing for 7 hours. After school I went right up to Hoop Group and worked out with some D1 college players and some high level high schools’ kids. We went at it for about an hour and a half and they definitely were not taking it easy on me. It was a really good workout.

Thursday: Today was the day I was finally graduating. It was crazy to think that the next chapter of my life was about to begin, but it also felt good knowing that I was going in the right direction. I had a half day so I decided to stay after school and play basketball with my friends. Then later that night, I graduated and we had an after party for all the graduates. We then went to one of my friend’s houses and I didn’t get home till after midnight. It was good to spend time with my classmates because everybody is going in a different direction next year.

Friday: Friday was our annual cut day, so no 8th graders went to school. I slept in for a bit and then I went and met up with one of my friends for breakfast. Since this was going to be one of the last times we were all together, most of the grade decided to hangout and go to the beach. I didn’t stay out long though because I wanted to go to Hoop Group in the afternoon to get a workout in. After working out, I went home to rest because I had a long day ahead of me the next day. I was invited to attend the Under Armour Next Combine Series in Manhattan.

Saturday: I had to wake up at 6 am to head up to New York City for the UA Next Combine. This event was probably one of the best basketball experiences I’ve had so far. It was a huge honor to be invited to such a great camp. I thought I played really well throughout the day and was happy with my performance in the 5 on 5 games. The camp was really well run and there was a ton of talent in the gym. After the combine my legs were dead, but it was my Mom’s birthday so we all got together for a family dinner and celebrated later that night.

Sunday: Sunday was a very chill day. After Saturday, I was very tired and run down so decided to chill out the whole day and take it easy. I was not going to touch a basketball today. I met up with some friends and went to the beach in the afternoon. It was Father’s Day, so we had a family dinner later that night.

I just want to thank Mike Melton & Basketball Spotlight for giving me this great opportunity to share my experiences over the last 8 weeks. Basketball Spotlight gives a great platform for middle school players to compete against the best competition with their tournaments and camps. They have definitely made me a better player over the last 4 years. Last but not least, I want to wish all my friends, teammates and fellow ballers in the Class of 2022 the best of luck next year in high school. The class 2022 is real strong and NJ is in good hands for years to come.

Ben Roy signing off for the last time ✌️
Posted by basketball spotlight at 7:27 AM