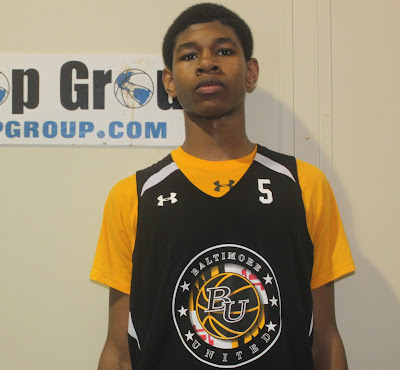 The Basketball Spotlight Tip Off Classic 2015 had an enormous amount of talent for the 8th Grade. We will definitely have to break it apart in sections. Here’s Part 2 of our top performers.

Justin Lewis Forward (Baltimore United)- The DMV has a budding star in this kid Lewis. Every time I see him on the floor he seems to have added another piece to his game. At the Tip Off Classic not only did he sport a new hair cut he also showed he has developed his perimeter skills. I was impressed with how he put the ball on the deck, created plays and extended his range. The explosive prospect had a big game with 16 points in a semi-final lost to Team Final. He has to be considered one of if not the top prospect in the DMV Class of 2020.

Rahim Ali Guard (Baltimore United)- Ali impressed us the Future Phenom Camp and used that momentum during the Tip Off Classic. The floor general used his quickness to get into the lane at will while also scoring and getting his teammates involved. He has some flair to his game and is willing to play both ends of the floor. He is a player to watch from the DMV area.

Jordan Toles Guard (Baltimore United)- Toles has calmed his game down some in terms of picking his spots to score. In the open court he showed off the athleticism that he is known for. I also like to energy how showed on the defensive end. He moves his feet, played the passing lanes and was also willing to stick his head in for a rebound.

Cameron Byers Forward (Baltimore United)- Byers did most of the dirty work inside. The bruising forward used his body to bang for rebounds and score buckets. He showed his worth in their semi-final loss to Team Final as he got busy on the blocks scoring 15 points and snatching several rebounds.

Noah Farrakhan Guard (NJ Playaz)- I don’t know where this kid came from but I enjoyed his game. The smooth point guard has a natural feel for the game. His instincts allowed him to score the rock or drop dimes for teammates. He was a like poetry in motion with the rock especially in the open floor. I like his body control and ability to finish with either hand. He was such a joy to watch.

Elijah Everett Forward (NJ Playaz)- Everett continues to develop offensively but was able to get the job done for most of the weekend. He has good quickness along the baseline and is a force on the boards. He punished the Brooklyn Rens with 20 points in their victory. He is the best 8th Grade prospect in NJ and should be a name to know in the Garden State for some time.

CJ Wilcher Guard (NJ Playaz)- Wilcher has shot up in height since he was a youngster and has a mean ratchet. He can definitely stroke it and the Playaz used him to stretch the defense. His scoring ability from the perimeter and attacking the basket helped the Playaz reach the final four.

Ray Figures Guard (NJ Playaz)- Figures played the point when Farrakhan got into his scoring mode and he did a good job. The strong guard had enough handle to get into the lane and used his body to shield shot blockers while scoring in the lane. He also has a nice jimmy from the perimeter. He’s a good looking piece for this squad.
Posted by basketball spotlight at 5:53 PM