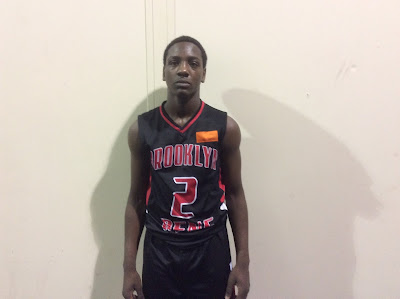 Kareem May AKA "THAT DUDE"

The Basketball Spotlight Tip Off Classic 2015 had an enormous amount of talent for the 8th Grade. We will definitely have to break it apart in sections. Here’s Part 3 of our top performers.

Kareem May Guard (Brooklyn Rens)- The BK Rens look like a different team this year and May is the lead catalyst. He has the rock on a string and uses a dazzling handle to get past defenders. He also possesses a mean pull up and unique finishing moves at the rim. He dropped a team high 20 points in a win against NY rivals PSA Cardinals. But don’t get me wrong this point guard is far from selfish and proves it by dropping dimes from anywhere on the floor. His play earned a nickname Kareem May AKA “THAT DUDE”.

Keyshawn Leslie Guard (Brooklyn Rens)- Leslie is a ultra-quick guard that attacks along the baseline and uses a nice floater at times. But Leslie showed us he could stretch the defense behind the arc when he banged home 4 treys against the NJ Playaz. He fits nicely with the Brooklyn Rens 3 guard offense.

Jason Palmer Guard (Brooklyn Rens)- Palmer is the third guard of this rising trio. He is the biggest in the bunch and has a smooth game to match. He can get it done from all three levels and does it with ease at times. His size allows him to play both sides of the ball very effectively. He might be a little under the radar know but look for that to change very soon.

Quaran McPherson Guard (NY Rens)- Speaking of being smooth, McPherson is an explosive guard that can anywhere on the floor when he makes his mind up. He plays the game with good intensity and loves attacking the rim. We will keep an eye on this kid.

Nate Tabor Forward (NY Rens)- There’s not many in the region more talented than Tabor. He has made the transition from post to wing and looks very comfortable. Besides finishing at the cup Tabor can create his own shot off the dribble. He feel for the game on the perimeter is on the rise which mean so will his stock.

John Wilson Guard (NY Rens)- Wilson was brought in the run the show he does a good job. He now has the strength to get in the lane and finish against any competition. On defense he doesn’t mind locking in and putting pressure on ball handlers. We look forward to watching him settle in with this bunch.

Zach Martini Forward (NY Rens)- Martini pushed around defenders on the blocks all weekend. He has worked on his touch around the rim and is a tireless rebounder. He anchors the inside play for the Rens on both ends of the floor. He clogs the lane well and serves as an intimidating force.

Matt Zona Forward (NY Rens)- Zona played mostly free throw line extended and cashed I with a face up jumper. Besides showing good touch he also helped out on the boards and has enough length to alter shots. He and Martini make a big front court.
Posted by basketball spotlight at 8:37 AM