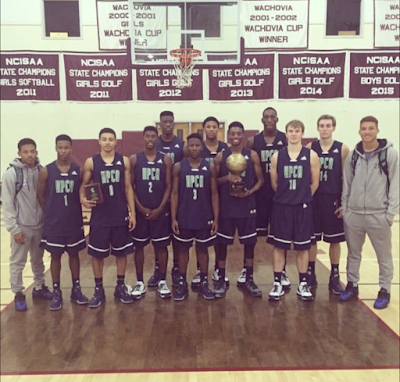 Our first game was this past Tuesday, November 17, 2015. Before the game my teammate, Edrice “Bam” Adebayo, signed his national letter of intent to play with the University of Kentucky! Our team surrounded him and his family as he signed. This was a great moment for my teammate and our team. We played New Garden Friends School and we beat them by 40+ points.

On Friday, we traveled to The Cannon School for their annual tournament. We played Metrolina and beat them by 40+ points. We made it to the championship on Saturday and we beat Durham Academy by 30+ points. I played solid defense in all three games and ran the point guard position well with many assists and rebounds. Coach Calipari from the University of Kentucky was in the building for the championship game. I made the top standouts for the Hoop’s Column report for the tournament.

They said the following.. “5’9″ PG Jalen Cone – Amongst the very best 8th graders in the nation, Cone once again showed why he is special. He played crucial minutes as a back up PG and found shooters in the corner. Very good athlete with excellent speed and quickness. Was very difficult for players 4 years older than him to stay in front of him. Elite PG.”

I learned that the game is faster, more physical and players are stronger on the high school level. I fit right in, I just have to let my confidence keep building and as my confidence builds I will become a better player.
Posted by basketball spotlight at 7:37 AM