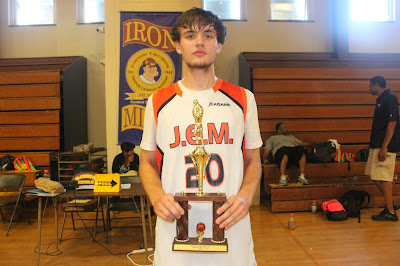 Patrick Stryzala scored 27 points but it wasn’t enough as the South Team defeated the North Team 107-101 to win the 8th Grade game of the 4th Annual J.E.M. All Star Classic. Andre Boykin and Tristan Patterson split 30 points for the South Team in the win.

MVP
Patrick Stryzala (Bayonne, NJ)- Stryzala arrived near Tip Off but didn’t need any real warm up time. Instead he blistered the South squad from the perimeter (4 treys) and scoring in traffic. He benefited greatly from the penetration style of the North guards. He quickly became a crowd favorite and took home the MVP honors when the contest ended.

Top Performers
Andre Boykin (Glendale, MD)- Boykin continues to extend his game to the perimeter. He nailed two treys and looked very comfortable shooting the mid range pull up. I can really see that he has been working in his game and it’s paying off.

Tristan Patterson (Smyrna, DE)-Patterson used this showcase to show he can finish with the best of them. He ran the lanes on the floor and scored the rock when the ball was dished his way. I like is explosiveness to the bucket and the touch he used to convert. He played his role to the fullest in this all star contest.

Manny Stokes (Hamilton, NJ)- The hometown kid felt very comfortable in this setting. He was very aggressive when attacking and picked his spots well. He’s a true slasher and showed more athleticism than I expected. He represented Mercer County in a big way.

Lonnie Walker (Reading, PA)- Walker is a still a little under the radar but I don’t think that will last long. He’s a natural scorer with the typical basketball frame to add to good instincts. I like his fluid motion when ball handling and his scoring mentality. He also showed he could play above the rim.

Trevon Duval (Wilmington, DE)- Speaking of playing above the rim, Duval loves this it. The hottest name in the region ended his elementary school career attacking defenders. His craftiness and feel for the game stood out. He’s a pretty finisher near the tin but prefers to jam it home in transition.

Eric Ayala (Wilmington, DE)- Ayala showed he could handle some of the point guard duties with a crisp handle and ability to penetrate. He’s the true meaning of the big guard. He gets anywhere he wants on the floor and can absorb contact before finishing. Delaware has another good prospect in this kid.

Deondre Bournes (Brooklyn, NY)- Bournes used his smooth pull up and perimeter skills to have a good showing. His size for the position is one of his best attributes along with his marksmanship while catching and shooting. He should be a great addition to any high school team next season.

Keith Williams (Brooklyn, NY)- Williams plays a lot bigger than his size. His versatility is one of his biggest weapons. He proved to be too big for small guards and too quick for forwards. I also like the intensity he plays with on the floor. This kid goes hard.

Marcus McClary (Linden, NJ)- McClary also played big because of the North’s lack of size. The lefty hit the glass and finished along the baseline. He also played pretty good defense which is rare in these types of games. His toughness, size and strength should help him walk right into varsity basketball.

Khalif Crawford (Linden, NJ)- Don’t be surprised if Crawford ends up as one of the top point guards in the this class. He’s not the quickest but his craftiness and shiftiness with the rock helps him skate pass defenders.

Stay tuned for the participant profiles coming soon!
Posted by basketball spotlight at 8:12 AM