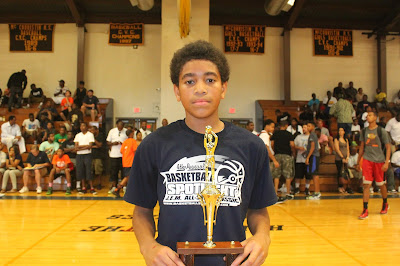 Jared Bynum scored 17 points to help the Blue team defeated the Orange team at the 7th Grade game of the 4th Annual J.E.M. All Star Classic. Luther Muhammad had a big game for the Orange game.

MVP
Jared Bynum (Landover, MD)- Bynum took home the MVP honors after knocking down 3 treys and giving the crowd a treat with his ball handling. He used double crossovers and hesitation dribbles to breakdown defenders. He also likes taking the big shot and usually nails it when it counts. The crowd and the announcer loved this kid before this the game was over.

Top Performers
Myles Dread (Burtonsville, MD)- Dread cashed in with another good showing. I like how his perimeter game is developing and he showed an improved jump shot. I was surprised on how good he looked in an All Star setting because he’s such a great teammate. He used his unselfishness to shine in this event.

Brandon Slater (Centreville, VA)- The scoring machine got things a little. He scored on the fast break while stretching out with left hand finishes. He also helped his own cause by grabbing rebounds and scoring on putbacks. This kid runs the floor like a deer. He’s definitely one of the best finishers in the country.

Luther Muhammad (Irvington, NJ)- Muhammad had a MVP type performance as he played with the intensity of a championship game. On offense he lived in the lane by attacking the rim like a mad man. He twisted around defenders and scored over shot blockers. On defense he did his usual versatile performance by getting guarding multiple positions and loving it.

Walter Tally (New York, NY)- Tally impressed me with his face up range. He isn’t that strong off the dribble but he can create enough space to knockdown jumper from the foul line area. He’s also a major problem on the glass on both ends of the floor.

Armoni Sexton (Paterson, NJ)- Sexton was one of the best prospects in the building. When he’s slashing he resembles a gazelle dashing through the forest. His long arms help him extend to the rim but he will need to shot his jump shot from a higher point. That should come as he gets older and stronger.

Tyson Eitenne (Englewood, NJ)- Eitenne sparked the event with his quickness and offensive mentality. He can score from the wing and also set up teammates. On defense he isn’t afraid to guard any of the top ball handlers while trying to cause turnovers. He definitely has our attention.
Posted by basketball spotlight at 2:18 PM