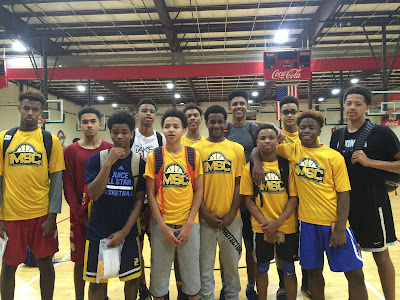 My apologies for the delay with this diary entry, but as always I'm excited to update you all on the week I've had since my last check in. It was another important week of preparation for me with the John Lucas Camp being only 5 days away.


Monday was a typical school day, but I was still feeling a little drained from the previous weekend's Under Armour combine. Even though my body was sore I came home after school and got my homework done before heading to a workout with my Dad. That night's workout focused on combination moves off the dribble and attacking the basket from different angles. Surprisingly, my body didn't feel so tired once we got going. After we finished up, I played a few games of pickup with some older guys who were also in the gym that evening. It was a little late by the time pickup was done so I headed right home, ate dinner, and got ready for bed.

Tuesday was similar to Monday, but I had a few tests to study for later in the week. After feeling like I had studied enough of my notes, I had a little time to rest before hitting the gym for my workout. That evening's workout was heavy on ball handling and conditioning but I was also able to get a lot of shots up during the drills. Conditioning was especially important with the Lucas camp coming up, since those environments are tiring and last all day. We started and finished earlier than Monday, so I got home in enough time to watch NBA playoff games before getting myself ready for bed.

Wednesday I had chores and more studying to do once I got home from school, so that took up a majority of my afternoon. I went for a run around my neighborhood and went to Wednesday church service since I hadn't been all week. The Pastor preached that night about the importance of taking care of our bodies and treating them like a temple. Once again I could relate to this since it's important as an athlete to stay in good physical shape. It's also good to maintain healthy habits for life in general. After getting home and eating dinner, I got some extra studying in for my tests the following morning.

Thursday was just more proof that preparation pays off in life. I haven't received my grades yet, but I'm pretty sure I did well on both my tests. With the tests behind me I was able to enjoy the rest of the day, which went by really fast. I had a few pieces of homework to do and once I finished I went outside for a long run. That night I had choir rehearsal. It's typically on Monday nights but this week they switched it to Thursday. We've been learning new songs for a trip to New York next weekend where we'll visit and sing at our Pastor's former church. Once rehearsal was done it was the usual routine of going home, eating dinner, and getting ready for bed. It was hard to fall asleep that night because I was excited thinking about the Lucas Camp. I felt confident that all my preparation would pay off against some really good competition from across country.

I woke up Friday excited and ready to compete. I flew into Houston that evening and had time to make it to a Houston Astros game with my Lightning teammates Posh, Quron, and Gary, who were also in town for camp. We talked about how excited we were to go against players we've never faced and representing the Northeast. The game actually had a lot of hits and home runs, so it didn't move as slow as other baseball games I've been to. After the game we went straight to our hotel and hung out in the lobby for a little while before going to sleep. Once again it was hard to fall asleep, but eventually I did.

The Lucas camp didn't start until noon Saturday which allowed us to sleep in a little. Houston is an hour behind local time in Connecticut, so it actually felt later than 9:30 am when we woke up. We ate breakfast, got dressed, and listened to some music before heading to the Legends Sports Complex where the camp was held. We checked in, got our jerseys, and shot around before the coaches broke us down into teams for testing and stations. The stations were all competitive and challenging, which was good for our overall development. I saw and was teamed up with quite a few players I knew from other camps, tournaments, and leagues; it made me realize just how fortunate I am to have met as many people and been exposed to the places I've seen through basketball. After the drills, we played games in front of coaches and talent evaluators who were seeing some of us for the first time. I played hard and definitely felt fatigued when Coach Lucas ended the camp for the evening. My teammates and I ate, talked about our experiences that day, then went right back to the hotel for bed. Camp was scheduled to start at 7:00 Sunday morning, so the alarm would be going off early!

When the alarm went off Sunday morning, it felt like I had only slept for a few hours. We had to be at the gym for 7:00, so we quickly got dressed and had a light breakfast before taking the quick drive. Everyone's body was sore from all the drills and games on Saturday, but I was excited to compete again. There were a few guest speakers to start the morning before we did a few more hours of station work. Once we finished, it was back to game play for the last 2 hours of camp. Before we began playing we were all notified that the coaches assigned us to new teams, so everyone was interested to know who they were playing with. My new team had a few guys I'm friends with and play against back home (John Wilson and Tyler Brelsford), so it was fun to play together in that environment. Once again I played hard and felt like my shot was falling from all the preparation before camp. Each team had great athletes and players so I was pleased to play well against that level of competition. Coach Lucas brought us all together and gave a brief speech before camp ended for the weekend. After showering at the hotel and getting something to eat, we all headed to the airport for our flights home. By the time I walked in my door, it was after 1:00 am. But as a committed student-athlete, I was up in the morning and at school just a few hours later. After a long week, I'm signing off until next time.