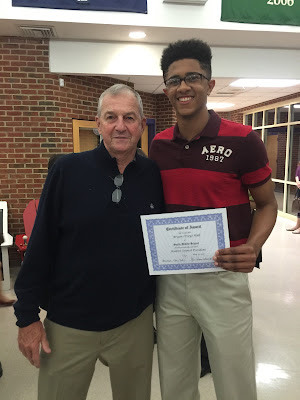 I'm glad to welcome you all back for another entry of my Basketball Spotlight diary. I started the week thinking it would be slower than most since we didn't have a tournament over the weekend. However as I write this I can say I was mistaken....the week went just as fast and I'm just as tired.


When I woke up Monday, I was still bothered by the way we lost our tournament semifinal Sunday afternoon. I took some time to think about ways I can help our team avoid those kinds of losses in the future before getting ready for school. When I got home, I finished my homework then headed to workouts for the evening. We spent a lot of time on conditioning before playing up and down for the rest of the night. It was late by the time I got home, so I ate dinner and quickly got myself to bed.

Tuesday's school day seemed to fly by. I didn't have much homework but I had to spend a few hours working on a project that's due next week. I also had vocab words to study for a Spanish final the following morning. I finished in just enough time to make it to choir practice where we went over songs for our Sunday concert in Buffalo, NY. Since there were a few new songs we were learning, we stayed until everyone knew their words. After all the weeks of preparing, we were excited to perform. I got home in time to catch some of that night's NBA playoff game before eating and heading to bed.

I felt confident about my Spanish final Wednesday morning, so I was relaxed for the rest of the school day. When I got home I had some time to get ahead on my project before I was dropped off at my workout. That evening's drills focused on combo moves and spot shooting from mid-range. I was able to get a lot of shots up which is always good for consistency. I want my shot to look and feel the same every time I shoot, so it's important that I get a lot of repetitions in workouts even if I have to stay longer. I was ready for dinner when I got home but had to iron clothes for our end of the year awards ceremony Thursday evening. Once I finished ironing my outfit, I ate dinner and tried to get to sleep soon after.

With the week winding down, Thursday was another school day that went by quickly. I had house chores to do when I got home, so I finished those and started getting ready for the awards ceremony a few hours later. It was a nice event that recognized students for their hard work and achievements throughout the school year. I was fortunate enough to be chosen to lead the audience in our country's Pledge of Allegiance and make event announcements. During the ceremony, I was presented with a Leadership Award for serving as the Student Council President. It felt good to be recognized for the work that our student government put all year. As excited as I was to receive my award, an even bigger surprise happened as we were all leaving the auditorium. While talking to some parents and teachers I noticed former UConn Head Coach Jim Calhoun walk by. He's a Hall of Fame Coach and a legend in Connecticut. Until that night I didn't realize a family member of his was in my class; he was kind enough to take a picture with me and talk for a second. Soon after the event ended I went out to dinner with family before going home for bed.

There were a few class trips Friday, so there weren't many students in school. I started packing my bags for Buffalo as soon as I got home since we'd be waking up early in the morning for the drive. Packing took longer than I thought but when I finished I made sure to relax so I wouldn't be tired when the alarm went off. I caught up on some TV shows, ate dinner, then went to bed early.

With the extra sleep, I felt good walking up Saturday. We started our drive in the morning and made it to Buffalo by early afternoon. After checking in the hotel, many of the church members went sightseeing around the city. I wanted to check out the two restaurants that claim to have invented the Buffalo Wing, but we didn't have enough time that evening. We still ate at a good restaurant before relaxing at the hotel and getting ready for the concert.

Sunday's concert during church service showed just how hard we had prepared over the months. Our choir sang well and the Buffalo church members were very welcoming. We had a second concert that afternoon, so we had time to get brunch right after service. The second concert went just as well as the first. When we were finished we spent some time talking with everyone before taking the 5 hour drive back home. I walked back in the door around midnight, so you already know it was right to bed for me. As this new week begins it's back to my routine of school, ball, and church. The Basketball Spotlight Memorial Day Classic is this weekend so I'll spend this week preparing for one of the toughest tournaments we'll play all summer. Tune back in next week when I'll update you all on the days leading up to it. Until then, stay blessed!