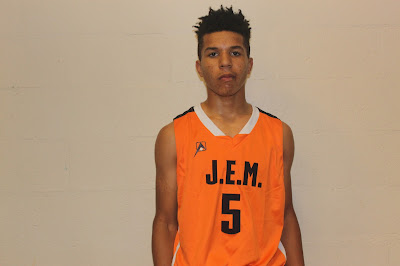 Cole Anthony Guard (New York, NY)- Anthony was awarded the Most Outstanding Player of the Year and showed why. When he attacks the defender is at his mercy. Once Anthony gets into triple threat he uses a jab step to create space. If the defender bites he will drain a deep trey if the defenders stands still then he blows by them to get into the lane. When you add that he can score from all three levels and finish above the rim, you have a problem. Cole led the Orange squad in scoring and capped off his Spotlight career in style.

Dyondre Dominquez Forward (Boston, MA)- Dominquez brought his all-around game down to this event. He hit the boards hard, finished while running the floor, shot the deep ball and showed a big time motor. His play spearheaded the Orange team strong comeback attempt. His size, nose for the ball and untapped potential makes him an intriguing prospect.

Scottie Lewis Forward (Hazlet, NJ)- “The Show” was his usual self at this event. He played both ends of the floor with the passion you have to love. He also showed some tighter moves on the offensive end. In terms of athleticism there’s no one in the country that comes close to this kid. He took the Spotlight by storm a year ago and gave us some great memories.

Tariq Ingraham Forward (New Castle, DE)- Ingraham fought double teams all day and still managed to put up buckets and hit the glass inside. His footwork continues to show improvement and he seems to get longer each time we see him in person. Is the State of Delaware big enough to contain big Ingraham the next few years? We shall see.

Josh Pierre Louis Guard (Plainfield, NJ)- Josh has added some wiggle to his game and had it on full display at the J.E.M. Classic. He constantly broke down defenders with swift dribble moves and quickness. He also has grown a few more inches and should be a player to keep an eye on in the future.

Peter Sorber Forward (Trenton, NJ)- Sorber didn’t light up the scoring column but he used a serious motor to make his presence felt defensively and on the offensive glass. Peter challenged some of the well-known players in the region. I like how he stepped up mentally.
Posted by basketball spotlight at 7:07 AM