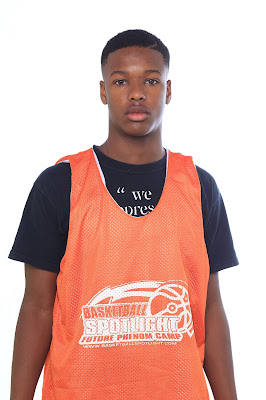 Jalen Cone Guard (North Carolina)- Last year during this time Cone introduced himself to the country at the Future Phenom Camp. This time around the lead guard came to Maryland and took the event by storm. Jalen handled both guard positions but impressed me the most at the point guard spot. I love his quickness, court awareness, ball handling and creativity. He got up and down the floor in a blur and was able get passed defenders in the half court set. On the scoring end Cone also know how to fill it up. He can drop buckets from all three levels. His biggest compliment came from his coach who stated, “Cone if the most coachable kid in the camp. Even though he’s talented he remains very focused and started straight in my eyes during timeouts” he finished.

Andrew King Forward (Pennsylvania)- We didn’t get to see much of King during the AAU season but he made up for it at the Future Phenom Camp. King used a strong frame and soft touch to feast on the defenders in Maryland. He’s moved out of that project status and now can he looked at as a producer. I see a lot more confidence in his game and moves appear to be more polished. He’s making a strong run at the top prospect spot in Pennsylvania.

Richie Greaves Guard (New Jersey)- The Garden State floor general has grown a few inches and his game shows it. Now he plays stronger with the rock which allows him to get anywhere he wants on the floor. He demonstrated good court vision and over all feel for the game. He has more confidence in his outside shot even though he will have to raise his release point before he reaches high school.

Keyshawn Johnson Guard (Washington, DC)- I would be hard for Johnson to top his performance from last year’s camp but he showed some overall improvements that helped him make this list. When I watched Johnson rock he seemed to make a more conscious effort to be a pass first type of guard. He’s added the drive, draw and dish factor to his game. This is important because it gives him another weapon to add to his arsenal and makes him more attractive to high school coaches.

Qaadir Maneri Guard (New York)- Maneri had his mind made up to score the rock before he arrived at the Future Phenom Camp. Because once the games started the power guard used strength and knack to score to pile up numbers. He has supreme body control and excels well in transition. His next step will be to develop more of an outside shot to keep the defense honest.

Justin Lewis Forward (Maryland)- Lewis has gotten stronger and longer since we checked him out last year. He now can hold a position on the blocks and finish in traffic. He now comfortable with putting the rock on the deck especially along the baseline. When he’s in his groove he’s fun to watch and difficult to contain.

Isaiah Kennedy Guard (Ohio)- Kennedy returned to the Future Phenom Camp and staked his claim as a guard to be reckoned with. He carries defenders to the cup and uses his feel for the game to make plays. His crafty handle and low dribble gets him into the lane at will and he will drain the outside jumper especially if he’s left open.

Jeremy Roach Guard (Maryland)- Roach has been one of the hottest names in the summer and he capped it off with his play at the Future Phenom Camp. The scoring guard started the camp on cruise control but turned up the volume as the games intensified. He looks his best when pushing the rock in transition and converting over shot blockers.

Travis Gray Guard (New York)- The Syracuse native first caught our eye at the MDC and continued to impress us at the Future Phenom Camp. He has a mean ratchet from the perimeter but I like his size and the potential he has. He’s a big time finisher and runs the floor like a deer. Don’t be surprised if he emerges as one of the top prospects when it’s said and done.
Posted by basketball spotlight at 8:31 AM