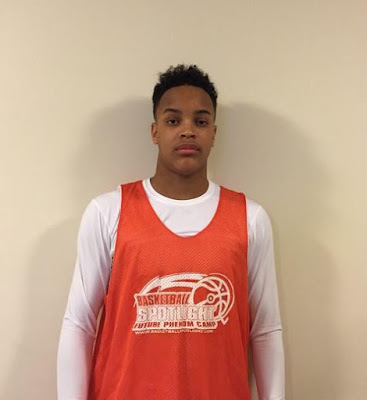 The Basketball Spotlight Future Phenom Camp Class of 2020 was crowded with some of the top players in the nation. Some of the participants were players that have been on the Spotlight scene for years. So our first look will be at the Usual Suspects that got busy in Maryland.

Terrence Williams Forward (Maryland)- This season we touted Williams as one of the most productive and dominant forces in the country. He proved this and more at the Future Phenom Camp. Big Smoove dominated on the baseline and in the paint. His touch is superb and his footwork helps separate him from his peers. I also was impressed with his improved leaping ability, he showed he could play above the rim and swatted shots all weekend. He was awarded MVP of this event after leading his team to the championship.

Isaiah Todd Forward (Virginia)- It’s hard to look at Todd and not drop your jaw because of his oozing talent. He runs the floor like a gazelle and finishes with the best of them. Now what’s really scary is Todd is now putting the rock on the floor and creating moves. His next step will be to extend his range on his outside shot. That shouldn’t take long because whoever is developing this kid is doing a great job. You might be looking at the future of basketball in DMV.

Jordan Toles Guard (Maryland)- The high flying guard is a joy to watch in transition as he has no problem attacking the rim. He’s one of the best slashers in the country and showed an improvement in his ball handling and decision making. Once Toles goes full speed it’s hard to slow him down. This kid get things done in this atmosphere.

Hunter Dickinson Forward (Virginia)- Hunter jumped into the Top 6 of the camp because he virtually dominated the game from the defensive end. He blocked and altered shots all weekend while also making driving guards think twice before they got to the rim. On offense he showed good touch on his face up jumper and was a viable finisher in close.

Cameron Byers Forward (Maryland)- Big Cam threw his body around all weekend. He pinned defenders deep under the cup and converted in the paint. I like how he has been running the floor lately and putting the rock on the deck. It will be hard for him to turn into a natural three but he could dangerous and quick four.

Che Evans Forward (Maryland)- One of the hottest names in the country made his appearance on Sunday and put in some work. He’s difficult to check on this level because he has the size and skill set to get a clean look on demand. He rocked defenders to sleep with his handle then used a slick step back move to nail jumpers. Evans can also take a smaller defender to the blocks and operate. It’s a great coincidence that he plays for Team Melo because his game is similar to the NY Knicks star.

Tyler Brelsford Guard (Maryland)- Brelsford didn’t start the camp out on fire but he gradually found his groove as the weekend went on. He seems to be growing so I think that his game is adjusting. He was still able to set up teammates and do some scoring on his own. If this growth spurt continues the rest of the guards in the country need to watch out.

Montez McNeil Forward (Maryland)- McNeil had some tough matchups at this event but the young forward held his own. He has decent footwork and battles hard for position on the post. I like his motor and willingness to compete against bigger defenders. When you factor in his young age, developing skills and potential size. He could be something special down the road.
Posted by basketball spotlight at 4:00 PM