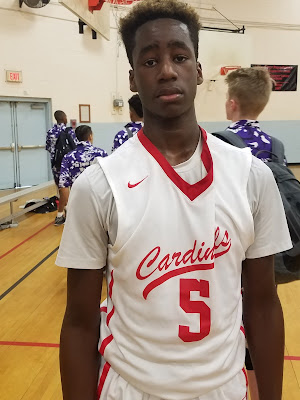 The Basketball Spotlight Atlantic City Showcase 8th Grade Division was loaded with talent. Here’s our final look at the Top Performers from that division.

Adrian Griffin Forward (PSA Cardinals) – Griffin is a long wing forward that can do a variety of things on the court. What caught our eye is his nice size and length and after watching him we feel his potential is through the roof. Griffin plays hard and runs the floor in transition finishing at a high level. He rebounds the ball very well and is a really good defender. We like that he can stretch the floor and can knock down the 3 ball versus just being able to drive to the basket. Adrian finished with 15 points including three 3 pointers in the game we watched. 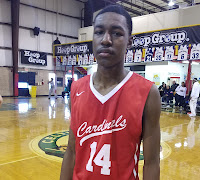 Drissa Traore Forward (PSA Cardinals) – Drissa consistently does what a coach wants every time we see him play. He plays hard with a high motor and he defends and rebounds. He is a problem for opposing teams because he protects the rim blocking and altering many shots either while guarding his man or from the help side. Offensively he is still developing but right now he is one of the better finishers around the basket with either hand. 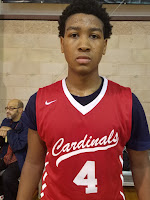 Daniel Nixon Forward (PSA Cardinals) – Nixon is a wing that plays with a great demeanor. The game looks like it is going slow to him. He has more an old school game where he keeps it simple and takes what the defense gives him. Right now with his 6’5 height and strong body he can get to the basket and finish through contact. Daniel also has a nice stroke from the three point line with a nice touch. 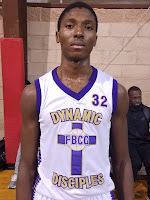 Mohammed Aminu Forward (Dynamic Disciples) – Aminu is a problem for any team that lines up against him. His size and athleticism at this level is hard to stop or even contain. He plays so hard and it always going downhill attacking the defense and no one wants to get in his way. We saw him go to multiple spin moves off the dribble attacking the basket and finishing with a nice touch. Mohammed also takes the pressure off his guards as he is able to be a secondary ball handler. He tallied 24 and 18 points in the games we watched. 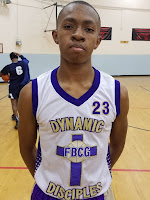 Anthony Jackson Guard (Dynamic Disciples) – Jackson takes on the role as the secondary scorer for his team. While Aminu gets most of his points at the rim, Anthony is the shooter on the team. He has a nice three point shot but what we noticed the most is his nice mid-range pull up game either off the bounce or catch. 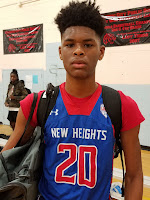 Daniel Beephat Forward (New Heights) – Daniel is a long active big man that plays with a high motor. When he was inserted in the game we watched him changed the whole complexion of the game by playing so hard the entire energy of New Heights changed. Defensively he blocks shots and rebounds at a high level. We also saw him on the floor getting loose balls and deflecting balls in passing lanes. He is a good finisher around the basket. 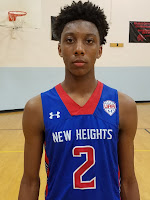 Quazawn Davis Guard (New Heights) – Davis is a long armed wing guard that looks like a good prospect to keep an eye on. He can knock down the 3 ball or attack the basket hard either finishing or drawing contact to go to the line where he knocked down his free throws. On defense he played at the top of the two three zone causing problems for the opposing team’s smaller guards. We also saw him challenge and block the other teams big man’s shot. 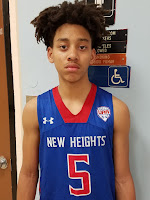 Jaquan Carlos Guard (New Heights) – Carlos is the floor general of his team and he does a good job of dictating the pace and flow of the game. He is a strong built guard that locks up on defense. He can also become a scorer when needed but equally he does a good team facilitating and running his team. He finished with 11 points in the game we watched. 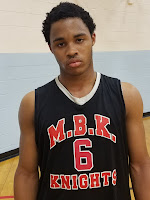 Yamire McCord Forward (MBK Knights) – McCord is a strong lefty that can handle the ball. He attacks the rim hard and plays with passion. Yamire has a soft touch and can score it from inside or outside. One of his biggest weapons was when he rebounds the ball and pushes it right down the defenses throat right to the cup. He finished with 20 points in the game we watched.
Posted by basketball spotlight at 5:19 PM