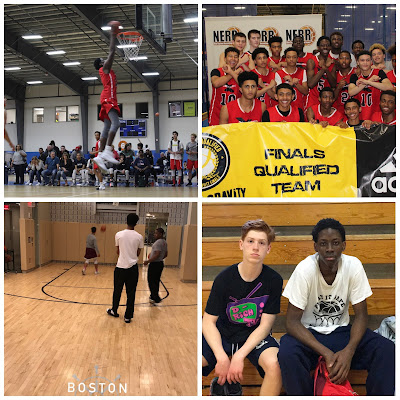 I’m glad to welcome you all to my fourth diary entry of my BBallSpotlight Diary. This week went by faster than usual for me because of my first spring tournament for 15U. There was lots of good teams to enjoy watching and I knew one of them was us so I had to get ready. My fatigue will definitely show for my next week of school. Even though, I still managed to get at least 50-100 push-ups and 100-300 toe raises and 150 squats in about 5-6 sets. I had enough good days at track to keep me in good shape.


When I woke up for school on Monday, I was still bothered by the way I lost my last 14U game. I thought about ways I can learn from the game and become a better leader for our squad. Heading into Atlantic City Showcase, we definitely have to patch up little mix ups. After school, I went outside on my schools basketball court and I worked on more of my ball handling with cones along with other objects to get around. I worked on my pull up, jump shots, and finishing moves. After dinner and study hall, I went to sleep quickly.

Tuesday, I woke up in a better mood. I didn't have much work to finish due to using my study hall time accordingly. Homework that was due within the next day or days following was completed instantly. After school, I had a fantastic day at track. I then went to the gym. I worked on my ball handling and more finishing moves. After study hall, I ate some cereal to finish the night and went to sleep.

Wednesday, I got more into the books. I completed my assignments so that my week would be easier. After school, during track I did crunches, push-ups and more conditioning work including running about a mile worth of distance. After school, I worked on all pull up jump shots that were off the dribble and combo dribble moves into my shot. Once I got back to my dorm, I was quick to sleep.

Knowing I was close to the weekend, I was getting more excited. After school, our track day was canceled due to the rain. So this was definitely the day to get in the gym. I worked on all moves to use in games. I used my time to work on hesitation pull-ups like Michael Porter and dribble moves with a little "Filllaaayyysss". Also, I worked on different dunks and trying to use my athleticism.

Friday was a calm and chill day. I finished all my work so I can have a good weekend and go into the next week without worrying. After school, I left to go to practice from 8-11. It was a good way to put plays in and work on the offense and defense we were going to use. After that, we went to sleep over my friend’s house with my teammates.

GAMEDAY! Saturday was time for the chicken. We had a game and it was out first game to test if we was ready for the next level with the talent we had. We proved why we're definitely one of the best teams in New England and maybe the country. We played together and made high level plays as a team. You can see we was having so much fun together. The second game was a forfeit so I got the chance to go home for a while. I then went back to my teammate’s house.

Sunday was championship day! We had three more games to get there. First game was a breeze. We played well and got the game over with. The second game was the main event of 15U. Expressions vs Playaz. There was a big crowd watching. I had a couple of high level plays with a big dunk down the middle from my teammate, Trey. That gave us a lot of momentum on our side and got us hype. We ended the game and won by a large margin. The championship game was based on our south team and Mass Rivals and our south team won so we couldn't play. We both took the championship home. As the new week begins, I'm going back to my routine of school, track, basketball then study hall. This new week will be work leading up to BballSpotlight's Atlantic City Showcase! I'll be working this week to advance my skill for the best 8th grade tournament this year. Tune in next week as I update you guys on how my week goes. Until then everyone stay blessed!