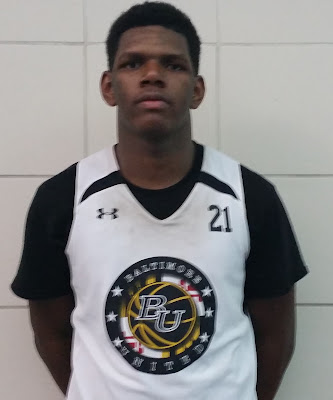 Looking at the Pools coming in everyone would have put their money on a B’More United Thrill, RIP City, NY Lightning, and Playaz Final 4 but it always seems like the Atlantic City Showcase is the Basketball Spotlight tournament that major upsets occur every year and this year was no different. NY Lightning got upset in the Elite 8 by We R 1 and Playaz got upset in the Elite 8 by Brooklyn Rens which nixed the re-match occurring of the Semifinal MADE Hoops game between NY Lightning and Playaz. B’More United and Rip City handled their business and played in the Semifinal with B’More United winning and We R 1 won a close one against the Brooklyn Rens to punch a ticket to the chip. We R 1 was overmatched by a very talented B’More United team and lost 70-40 in the chip. We believe that B’More United Thrill has to be considered a Top 5 8th grade team in the country as they have been proving it on the court. As a note they also had a tough Pool win against the Playaz.

Cam Byers Forward (B’More United) – Cam is a strong 6’5 big that can play physical or with finesse. He can play at the high, mid or lost post on offense. His strong frame allows him to post up with his back to the basket and go to work as he can finish at a high percentage with both hands. Cam also likes to receive the ball at the high post and either knock down the 12-15 foot jumper or attack the basket off the bounce. He had 16, 17, and 16 points in the Chip, Semi, and Pool game against the Playaz. In those 3 games he was also 13-18 from the charity stripe which is 72%. Cam came to play and was the X factor for B’More United this past weekend.

Jordan Toles Guard (B’More United) – Toles right now is always the most athletic player on the floor as was evident in the chip when he caught a back door two handed alley oop that sent the crowd into a frenzy. What we liked in Toles maturation is that he is starting to try and balance out his scoring and facilitating. In the past Jordan was always looking to score but now he picks his spots and takes more of a facilitating role on the team. He made a lot of nice passes racking up assists when we were watching. This transition is a look into the future as Toles will more than likely need to move to the lead guard if his aspirations are to play Major D1 basketball. His jump shot looked better and with continued reps it could become the final piece in his position change. Toles scored 11, 10, and 18 points in the Chip, Semi, and Pool game against the Playaz. 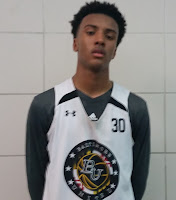 Caleb Dorsey Forward (B’More United) – Caleb might be the best overall prospect on this talented team. He is the tallest player on the team at around 6’6 and he already has the skill set of a Wing Forward. He can really shoot it from the 3pt line and has a good enough handle to drive to the basket from the wing. One play we saw him grab a rebound and go coast to coast and finish with an And 1.

Adrian Baldwin Guard (B’More United) – Adrian is a lefty that loves to beat his man off the dribble and get into the lane and finish with the floater. He can also knock down the 3 ball but getting into the paint is what he does best. Baldwin is also a pesky defender and an adequate passer from the PG position. He finished with a game high 20 points in the chip.

Keshaun Hammonds Guard (We R 1) – Hammonds is a skinny long combo guard that looks like he is still growing. He has a nice 3 point shot and is fearless when attacking the basket. Right now he is a more of a scorer than a facilitator. When we watched him against the Brooklyn Rens he was the difference down the stretch as he made a tough contested layup in transition and then calmly knocked down 2 FT’s to seal it. He had 14 points in the Semifinal win and finished with 7 markers in the chip.

Hakim Byrd Guard (We R 1) – Byrd is a smaller guard that is always in attack mode and is fearless. He can knock down the 3 pointer or get in the paint and finish around or over the bigs. He scored 11 points both in the semi and the chip.

Ahmir Harris Guard (We R 1) – Harris is a strong guard that handles a lot of the point guard duties. He never seems to rush, handles up and your face defensive pressure and always makes the right play or pass. Right now he is more a facilitator than a scorer. Ahmir loves to use his strong frame to drive and kick to open shooters. 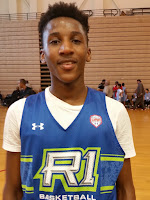 Jamir Watkins Forward (We R 1) – Watkins is an undersized forward that has to play down low due to necessity. He does the dirty work of rebounding and having to guard usually a bigger player on the other team. He finishes well in transition or around the basket. He will move more to the wing as he continues to refine his skillset.
Posted by basketball spotlight at 6:32 AM