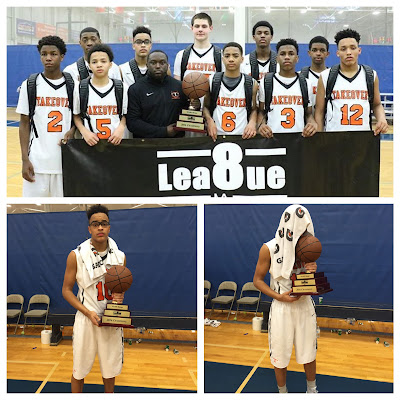 Terrence And His Team Win Title

This week I prepared for Made Hoops championship weekend, so Monday-Friday I did all basketball workouts. On Monday I went to Leslie for 2 hours right after school. On Tuesday we had TTO practice with our 7th grade to prepare for the upcoming weekend. On Wednesday I went to my trainer Shi and got a lot of shots up. On Thursday we got another practice in, but this time with just our 8th grade team. This practice was intense since we had to get ready for the weekend. On Friday I went to Shi again after school and got a lot of shots up so I would be prepared for the weekend. On Saturday, we drove to King of Prussia, PA.

Our first game was vs Team United (TU). We knew we would have to come to play because the first time we played them it went into OT, even though we had a comfortable lead late in the game. We won this game 61-45 and advanced to the semifinals vs NY Gauchos. After the TU game, we went out to eat, as a team, for my lil man Mike birthday. This was a great bonding time with my team before day 2 of Made Hoops championship weekend.

We had Gauchos early in the morning. They almost beat us in session 3 of Made Hoops because we took them lightly, so we knew we had to play hard or they would beat us. We came out sluggish but got it together later on in the first half. This game ended up going into OT but we won by one, 47-46.

Now the championship! We were coming into the championship 12-0 in Made Hoops play. We knew Playaz were going to give all they had to knock us off. We started off strong and ended the first half 15-33. In the second we kept the lead for a while but they would not go away. Off of some crucial late free throws, we ended up winning 60-55. It felt good winning Made Hoops championship especially because my team last year lost in the ship to CP3. We accomplished our goal of going through Made Hoops without losing a game. S/O to our 7th grade TTO too as they won the Future division a second time, going through both sessions undefeated.

This weekend I realized even more the importance of team play, which is the only way to win. We came together and fought through adversity, as a team. S/O to my brothers on and off the court. We came through. Now to get ready for the AAU season and 15U EYBL. I'll talk to you next week in my next diary.

Peace !
Posted by basketball spotlight at 7:43 AM