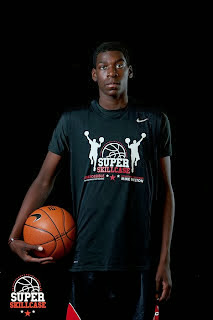 The 2nd Annual Super Skillcase is shaping up to be a superb event. Basketball Spotlight is excited because this will give us a chance to some nationally ranked players do battle while giving some under the radar prospects a chance to jump into our April rankings. Here’s a look at who will be bringing their game to AC.

Nazi Reid: Yes the #1 prospect in the region and #3 in America will be making his second Super Skillcase appearance. This kid continues to show strides on the perimeter and expand his game. A dominate performance in AC and a few good showings on the circuit might make him the regions first #1 grammar player in America since Tyreke Evans.

Armoni Sexton: “The Live Wire” checks in at #11 on our national list. His potential is enormous and he brings a burst on energy when he steps on the floor. Right now he has his sights set on stepping into that Top 10 and challenging Reid for regional supremacy. We look for some exciting things from Sexton in AC.

Atiba Taylor: Taylor enters the Skillcase labeled as the #1 point guard in the country. His play last year earned him the crown and now he’s looking to keep the momentum going into the Super Skillcase. He has many guards chomping at his heels but I’ve seen this kid is pressure packed situations so he will be fine.

Jahvon Quinerly: Quinerly has to be one of the most exciting guards in the region and capable of pumping in 30 on any given night. He currently holds the #25 spot and could possibly crack into the Top 20 by the spring.

Cameron Reddish: Reddish upside is through the roof and this event is his chance to show he’s ready to move from “The Prince” to “The King”. His fluid game and natural feel will give him the chance to dominate whenever he wants. He’s currently #29 on our list.

Damon Harge: Harge relishes in this environment. His breakdown ability and range has made him a national name for many years. He’s currently #31 on our list while others believe he’s a Top 10 talent. Now it’s his chance to turn us into believers.

Aaron Clarke: After watching a recent event we might Clarke a little too low at #40. So I caution defenders to beware in AC. This lefty has a serious ratchet and improved quickness on both ends of the floor. This could his national coming out party.

Mikey Watkins: Watkins will be ready to show that true point guards can shine in this up and down event. He has proven to be able to take care of the rock and make good decisions. He’s looking to move up from his #53 spot in the spring.

Ja’quaye James: James didn’t crack our Top 70 list, which means the Big Apple product has a checklist of prospects to go after. His hunger and swagger on the floor could help him crash the party and jump into our spring rankings.

Tysyon Eitenne: If Eitenne catches fire in AC he stock could surely rise. The combo guard scores in bunches and can get past defenders with the blink of an eye. He also will be looking to crack into our next list.
Posted by basketball spotlight at 11:07 AM