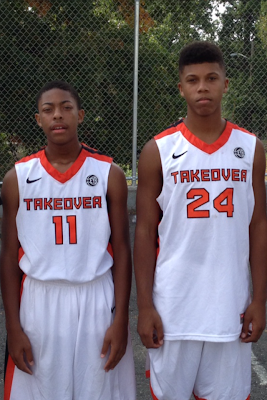 This was a tough week for me. I had to take most of the week off from practice and workouts because I pulled my groin. Man that is a painful injury! I haven't had to sit out like that for a few years. The last time I missed a bunch of time was when I broke my thumb in the 5th grade. I was especially worried about getting healthy so I could play in my first tournament with Team Takeover this weekend. But after a few days off and a lot of ice, I was 100% for my tournament this weekend. Thanks Mom!


I had a great week in school. I had a big Spanish test that I got an A on. Then I got a 100% on my Science test. My English teacher said I was doing so well he moved me up to Advanced English. I know the work is going to be tougher but I think it will help me get ready for high school. I am really trying to get straight A's this marking period. Maybe my parents will hook me up with some new Jordan's if I get straight A's.

This weekend we played in the Playaz tournament. We lost to the Playaz in the semi-finals. This was our first tournament with a new group of players. There were a few players from my old Metro Sixers team and few kids that were already on Team Takeover. It was fun because I got to stay with other guys on my team. It felt like we were in college. We did everything as a team. Our parents got to come watch us play but then we went back to hotel for coaching sessions. We played hard! We need to learn how to play with each other better. Coach Keith told me I need to learn how to rebound from my new position. He also expects me to look to score more. This was the first time I really played a guard position in a major tournament like this. So I know I have a lot of work to do. I really like playing with my new and old teammates. This is going to be a fun year! We had two great battles with the Brooklyn Badgers and The Playaz. Those are the games I really like to play in. They both went down to the last second. If we continue to play tough teams like this all year, we will definitely be ready for summer.

Until next week
Posted by basketball spotlight at 9:23 AM