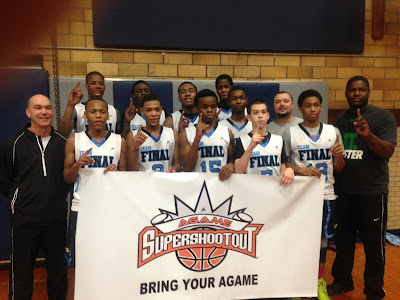 Quade Green Guard (Team Final)- This was the third event I saw Green play this season and his best output. This time out the combo guard didn’t force the action but instead played within the flow of the team. He picked his spots in the half court set and exploded to the basket in transition. His mature approach helped his team pull out the victory.

Daron Russell Guard (Team Final)- This pleasant surprise sparked Team Final off the pine when their offense stalled. He nailed a few treys and converted on the fast break. The Mid Atlantic boys definitely needed his contribution and he played his role very well.

DeAndre Vilmer Forward (Team Final)- Vilmer also registered his best performance of the season. The energy player attacked the lane and scored over the big post players. He also played excellent defense and used his quickness to disrupt the Rens offense. He looked like the slashing athlete of last year.

Evan Logino Forward (Team Final)- Once again Logino brought his hard hat. But this time the job was a little tougher because New Rens had massive Dwayne Thomas inside. Evan used his skills to maneuver around the mountain and get a few buckets. He also took on the task of keeping this brick house off the glass.

Tyler Bournes Guard (New Rens)- Bournes is the scoring catalyst for this blue collar squad. His outside shot looked good in form but wasn’t falling like times in the past. But He did get a few buckets because he’s a natural shot maker and lives for the big moment.

Pierce Bozcar Guard (New Rens)- The sharp shooter helped Rens climb back in with some deep jumpers. His ability to stretch the defense helps open things up inside for this physical bunch. He actually pulled one trey from the hash mark.

Marco Morency Forward (New Rens)- Marco had to be one of the best athletes in this event. The slashing wing player excelled on the baseline and helped out on the glass. I would like to watch a little more so I can analyze his ball handling and outside shot.
Posted by basketball spotlight at 2:19 PM