Cadeau and Pettiford The Best Back Court In America? 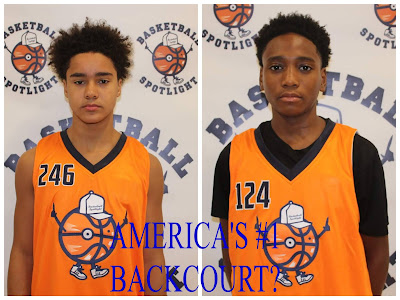 The Basketball Spotlight Spring Invitational received some buzz once QB Elite finished their 3:00 PM  match-up with eventual champion Wiz Kids. The buzz was that QB Elite back court of Elliot Cadeau and Tahaad Pettiford was ripping up the competition. Cadeau was showing extreme court vision and Pettiford was launching bombs. This buzz picked up more steam as QB Elite mercy ruled loaded Expressions Elite. After that game the buzz turned into statements such as Cadeau and Pettiford being the best back court in the country.


This caused Basketball Spotlight and examine this situation. I first looked back at last year and remember they were the back court on that tough Sports U team that ran through the Spotlight circuit and won the Under Amor League title. This season the pair orchestrated the NY Lightning to a recent Made Hoops Championship. Their play at the Spring Invitational caused me to reach out to other scouts and personnel to get their feedback on the question.

Do you feel Cadeau and Pettiford are the best back court in America?

Andrew Brelsford (Under Amor and BBall Spotlight Scout): “I definitely think they are the best backcourt in America. Both are elite playmakers that can put up numbers. Elliot could arguably be the best pure Point Guard in the country and Tahaad could arguably be the best 3-point shooting/Scoring combo guard in the country. They complement each other very well and I have covered both for many years. They are fun to watch.”

Everton Browne (NY Phenom and BBall Spotlight Scout): “Yes, they are a one two punch. They know where each other will be on the court. The IQ they both play with is incredible. You have the best point guard in the country playing alongside the best shooter in America. They both play defense and have killer attitudes.”

Dana Dingle (Director NY Lightning): “Yes, because there’s no better combination skill and IQ combined with the know how to win. Both players are too difficult to contain.”

Qua Roberson (Coach QB Elite): “Absolutely hands down. There are no guards that can stay in front of them They are before their time in terms of basketball IQ and have been winning consistently for years now.”

Brian Coleman (Director RIO University): "I consider Elliot and Tahaad back court in the country (2024) because of how they compete as a tandem. Elliot is a floor general that has developed into a very good scorer over the years. Tahaad's best attribute some people might think is his dead eye shooting but it's his fearlessness. He's not afraid of the big moment, he has ice water in his veins. They strap up from start to finish."

Spencer Pulliam (Legendary Middle School Scout): "They have to be considered for sure. Cadeau certainly one of best middle school point guards in the country and Pettiford is an absolute sniper. More impactful every time I see him,


Posted by basketball spotlight at 3:10 PM