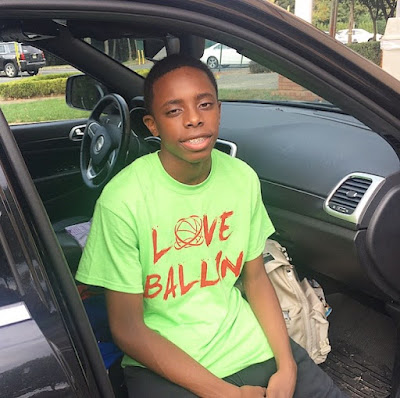 Jayden Pierre Getting Ready For Action

Jayden "JP" Pierre here with entry #5 of my Diary

Monday was Columbus Day, we were off from school, I had to be up early, because I had an early morning workout at the school. We worked on creating space and shooting off the dribble, it was a pretty intense workout, we were in there for three hours. After the workout I went home and took a nap, before I had to be back to the school for team practice. After practice, I was tired. I got home I took a shower and went to bed early.


Tuesday, I woke up feeling rested, the school day went by pretty fast. I didn’t have any basketball workouts after school, I had a strength and conditioning workout at Annex Sports later that evening. I've been focusing on getting stronger this year. After leaving Annex Sports, I got home, did my push-ups and calf raises, took a shower, and went to bed.

Wednesday morning, I got off to a good start, I was up early and ready for school. I had a good day at school and got all of my work done early. After school, I had three-hour workout session with BadSocietyBball. We worked on a lot of one on one Isolation drills, staying low, 3 dribble attacks, and going downhill. It was a really good intense session. When I got home, I jumped right in the shower then went to bed.

Thursday morning, I woke up feeling refreshed. I had a really good day at school, we didn't have no practice or workouts after school. My dad took me to the gym and we worked on different finishes around the basket, and also worked on my pull up jump shot. After we left the gym, we grabbed something to eat. When I got home, I did my night time workout, then went to bed.

Friday was a slow morning, it felt like the school day was taking forever. After school we got in the gym and played 5 on 5. Afterwards I had a workout session with BadSocietyBball. It was a good workout, but I was kind of tired, but was able to push through it. After I got home I just wanted to go to bed. I had to be up and be in the gym by 9am.

Saturday morning, I got myself together and was in the gym by 9am. I did some ball handling drills, then got on the shooting gun, I shot a lot of 3 pointers. I've been focusing on getting more consistent shooting the long ball, and extending my range. After that I went home, I did my laundry, then took a nap. When I got up from my nap, I had to get ready, I was invited to play in the Love Ballin All Star game. It was a good game, I had fun and was glad I got invited.

Sunday, I had to be up early for the Team Rio middle school and high school fall workout. I enjoyed working out and competing against the high school guys. They are stronger and faster, which forces me to make quick decisions. Afterwards I went home and did my homework before taking a shower and going to bed.

Jayden "JP" Pierre signing off
Follow me on IG: @Jayden_JP_Pierre
Posted by basketball spotlight at 9:53 AM