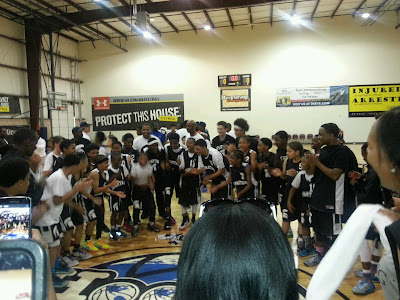 Boston Spartans have developed to one of the top grammar school AAU programs in the New England area. They won a few Basketball Spotlight banners among other championships. Joe Chatman has put together and program that continues on the rise so we decided to sit down with the Bean Town native and find out his secret.

BS: How was the Boston Spartans AAU program established?
JC: The Spartans were established in the Spring of 2009. It started out as simply a place where kids can come and workout with me lol, when I actually could still play lol. Parents continually asked me about coaching and starting a youth team. The program grew from 1 team to 5 very solid teams.


BS: What is the program mission for Boston Spartans?
JC: The mission of the Spartans program is use basketball as a vehicle to achieve a better education while learning the game of basketball in its purest form. Our goal isn't to produce McDonalds All-Americans, it's to produce the best student-athletes we possibly can.

BS: Who are some of the top players that have come through your program?
JC: We have had so many great players come thru our program: Mike Rodriquez, (SUI '17'), Kahari Beaufort (UTenn Martin '17'), Markus Neale, Damion Smith, Ernie Chatman, Alijah Rue (Undecided) and Kellan Grady (Davidson '21') to name a few.

BS: What are some of the challenges of building an AAU program?
JC: Most challenging thing I would say is getting families to trust you. There are so many AAU teams that are focused on wrong things. The next challenge is making sure your players understand the importance of academics. We start at a young at the age of 10, so maintaining that balance is always tough for young players.

BS: Where do you see the Boston Spartans program in 5 years?
JC: In 5 years our goal is to be a better program than we were yesterday. Another goal is to open up more opportunities for the inner city kids of Boston. It's nice to win championships but it's even nicer to have families receives letters from Prep/Catholic Schools stating that their son is going to school on full aid.

BS: What was your greatest moment with the Boston Spartans?
JC: Greatest Moments, that's tough Mike! We have had some great moments through the years on and off the court. Basketball moments are when we finished third in the country in 2012 Division 1 8th grade Nationals, winning 3 different age divisions in the BBall Spotlight MDC last spring, winning 4 Super Regional championship last spring. Academic moments is when Mike Rodriques and Kahari Beaufort played against each other this past college basketball season and both will be the first college graduates with D1 scholarships in the program.

BS: If I had a son in New England why would I choose Boston Spartans?
JC: Hopefully you would want your son to be a part of a family! To be pushed academically and basketball wise like never before. We stress playing the game the right way while maintaining your grades at a high level.

BS: Any parting shots?
JC: We would look to thank Mike Melton for all his support for the Boston Spartans... Keep doing what you’re doing, I know I speak for several programs when I say thanks for everything you do for grammar school AAU!
Posted by basketball spotlight at 10:41 AM