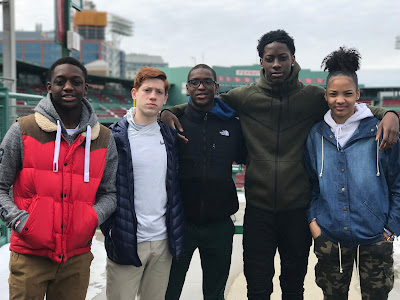 Terrence Clarke And Teammates On Trip

I would like to welcome you all to my second BballSpotlight Diary. This week was a very up and going week due to trips around New England for sports and my team’s basketball tournament. I didn't have classes due to March Experimental Learning Program (MELP) which is something my school participates in every year. We go around New England and learn information about sports.

Once I got back to school, I fell asleep and woke up for my first day back from break. I was in a good mood due to no classes. My first trip was to the Tennis Hall of Fame! This wasn't the best trip but I did learn that tennis is a fun sport. The tallest Tennis player is 6'10! Foot speed and his use of wingspan must be huge! Serena Williams is in my eyes, the Greatest of All Time. After I got back to school, I worked out for about 30 minutes and then played two on two with my basketball teammates for the rest of the 45 minutes.

Tuesday was a long, tiring, and wild day. We started our day off by going to tour Fenway Park! To be technical, the Red Sox have been beating the Yankees from day one! Also, the green monster of Fenway is ridiculously huge. Tickets to watch the game on the green monster is $650 against the Cubs! Then, I went to the TD Garden to tour the New England Museum. I saw jerseys, sculptures, pictures and actual items from the Bruins, Celtics, Patriots, and the Red Sox! It's great to learn your history on where you come from. To end the day, we watched a Bruins game vs Senators at the TD Garden. Unfortunately, the Bruins lost 2-3. The game came very close and went down to the wire.

Due to getting in bed late because of the Bruins game, I woke up lousy and tired. We went to Gillette Stadium where the New England Patriots play. Seeing what the patriots were made of shows that chasing your dreams and never giving up is a step to succession. After, we went rock climbing. That was my first time and it was very challenging. It was also fascinating when you basically had to get pulled back to the ground. To end the day, we had ice cream and had time to socialize with each other.

The most anticipated day of the week was Thursday. We was heading to the Basketball Hall of Fame! We got to see the greatest player’s bios and photos. Seeing Michael Jordan, Bill Russell, Larry Bird, Magic Johnson, and more makes me want to work even harder than I'm working now, so I can see my own name too. We then went on the basketball court to shoot around and have fun. After, we went to Dave and Busters to chill and rest to enjoy our time with each other. To end the night, I played lots of basketball and 21 games with my teammates.

Friday was the best day to observe a lot. We toured UConn's facilities. This showed me that putting in the work will pay off. I got too see football, basketball, track and more players and athletic trainers in action. It was a fun sighting of the University. I then went home to my hometown, Boston. I stayed at the gym until 10:30 to 11 o'clock playing pickup with older kids and kids my age for the night to prepare myself for the weekend tournament.

Saturday was an easy going day. I relaxed and iced my knees before my three and five o'clock games. There was a countless number of people coming to watch us play & there was so much hype. We blew the teams out by more than 20 to put us in a good place in our pool to advance.

Chip chasing day. Sunday was the day to go after the championship for the tournament. We beat our first two opponents by 20 points showing that we were hungry. Even though we were tired and some of us injured, we played the championship game right after our win. The game started quick. Our opponents jumped out to a lead quickly. We cut the lead down to four by the half after being down 12. Second half, we cut the lead to two after being down eight. Sadly, we couldn't complete the job and lost by 12 points. As the new week begins, I'll be continuing back to my regular school routine and work towards playing up in EYBL. Tune in next week as I update you all on how my week went and how my weekend goes as of practices or tournaments. Until then, everyone stay safe and bless up!