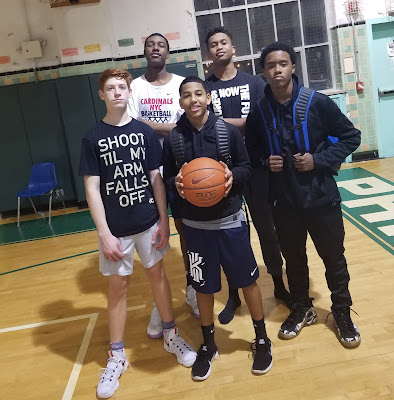 Adrissa With His Teammates!

Welcome to my 4th Diary Entry.

Happy New Year to all and I wish a bless year to everyone. My New Year's resolution is to get my younger brother, Soumana, ready to play basketball. He is nine and really likes the game and wants to learn. I look forward to working with him during the year.


On Monday, I went to go work out with Coach Greg and Coach Joe. We were working on my strength and conditioning in order to make my moves stronger and more effective. I also played Coach Greg in a one on one. I hit him with a couple of moves but he got the W in the end. He still has a little game. In a year I'm going to bake him every time he wants to play me. After that I was hanging out with my bro, Isaac Santiago. He also plays with PSA Cardinals. We went to the mall to get some gear.

On Tuesday and Wednesday, I had team practice. We worked on catching alleys off screens and working on shooting off the pin down screens. We also worked on communicating on defense so we are all on the same page on defense and boxing out on for defensive rebounds. We finished off practice playing against some high schoolers that were also in the gym so we can get used to being more physical.

On Friday, I needed to be a big brother and looked after my siblings. I'm the oldest of five. I have three sisters and a brother. When my parents got back from work, I went to go try to play ball in a gym but on my way, I ran in to Mohamed Bamba one of the top basketball players in the class of 2017, who lives a block away for me. He is also a PSA Cardinal and he asked me if I wanted to go to Terminal 23 to work out with him. Of course I said YES!!. We worked on our post moves and then played one on one. It was great to learn from him and I look up to him. Our families are from the same country, Mali, and it’s great to see someone like me doing well in the things that I love. Definitely helps me to keep me focused.

All right guys that it for Diary Entry #4.

Peace out.
Posted by basketball spotlight at 3:57 PM