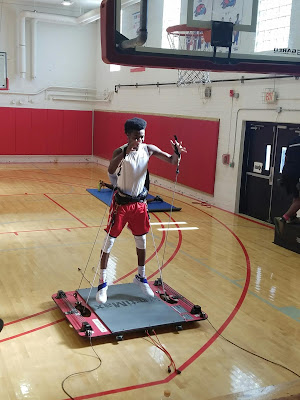 Trey Working On The Vertimax

This is Trey Patterson signing back in for my 6th week of ‘Diary of a Baller’. It was a very busy and hard-working week for me.


On Monday, it was a very light day for me. I had a well visit doctor’s appointment, and to update my physical form for school. When I got home, I played Xbox for an hour or so, then I worked out on the court in my backyard. I did ball handling and shooting drills.

On Tuesday, I had a cross country meet at the Hun School. This course was very hilly and real brutal to run. But, it was my 3rd time running this course in the past 2 years, so I knew what to expect. Although this was a tough course, I finished 1st place overall. Later that night, I went to a high school fall league game. The game wasn’t that exciting because it was a one sided blow out.

On Wednesday, I had a physical therapy appointment. My therapy sessions are always demanding and intense for a good hour and a half. During this workout, the main focus was on improving my explosiveness and increasing my foot speed.

On Thursday, I had another cross country meet against the Ranney School. The setup was weird this week because we usually have one meet a week, but we had two meets this week. The course was about 1.5 miles; it was one of the shortest courses I ran this year. Also, I came in first place overall, again. Later that night, I had an orthodontist appointment to check on the progress of my braces.

On Saturday, I literally spent a full day of working out in the gym. In the morning, I had a workout were the focus was mostly on ball handling and increasing stamina. After the morning workout, a group of us went to eat lunch at a nearby mall. After lunch, I had a skills workout. During this workout, the group worked on a lot of pivoting drills to enhance our footwork and help us to create space against defenders.

On Sunday, in the morning, I had a muscle endurance and explosion workout. This workout was a new experience for me, as I had an opportunity to use the Vertimax for the first time. We also did exercises like dumbbell squat and lunges. When the workout was over, my mom and I went to Hoop Group to watch some of the high school team’s play. The teams I saw play were: The Patrick School vs St Raymonds. I thought this game would have been a much closer game, but the Patrick School took a big early lead and never looked back. The match up between Gill St Bernards vs. Ranney School was another game I was surprised the score favored Gill with a big lead. The St Anthony’s game vs Trinity Academy was a close one. It was good to see some of the top high school teams from New Jersey/ New York compete before their actual basketball seasons begin. It was also good to see many players that I played middle school AAU basketball with making the transition to their new high school teams.

Until next time, Trey Patterson signing off.
Posted by basketball spotlight at 8:37 AM