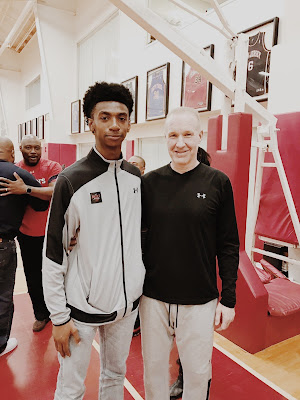 This is Trey Patterson signing back in for my 5th week of ‘Diary of a Baller’. This past week was very eventful for me.

The next day Tuesday, I had physical therapy and I worked on improving the strength of my calves and quads. My therapist, Andrew reviewed my body scan report that I was tested for a few weeks ago, and he also started creating a program for me, to focus on strengthen those weak muscles that were identified in the report. I try to get into therapy at least once a week, to keep progressing as an athlete.

On Wednesday, I didn’t have school because of it being a Jewish holiday, so I took this day off, as an opportunity to relax, complete some homework and play my Xbox with friends, because I knew the rest of the week was going to be a busy one for me.

On Thursday, I had an away cross country meet which took place at the Pingry School in Basking Ridge, New Jersey. The weather was chilly, but not too cold, I feel like I run, my best race when it’s slightly cold outside. I came in 2nd place overall. The kid who came in 1st place, he was very fast, I said to myself, he has to run all year round, because he was just way too fast with great endurance. But, he challenged me, which I liked, and by him doing so, I improved my mile time by 7 seconds, my personal best is now at 6 minutes and 17 seconds a mile. In my last 3 meets, I have increased my mile time by 7 seconds, which I am excited about.

On Friday, I went to St. John’s Midnight Madness in New York City. I liked this event way better than the Rutgers Midnight Madness, I went to last week. The Men’s team held a scrimmage, unlike Rutgers. The DJ was very good, and I liked a lot of the music he played. This was a packed sold out event, and the students really came out to support their Men’s and Women’s Basketball Teams. Many of St. John’s alumni were in attendance, most notable to me, was J.Cole. After the basketball events, the rapper, Designer performed and he had the place jumping. He told everyone in the stands, to come join him on the court, then people started rushing the court. At the end, of his performance, the tech crew turned off the speakers and mic while he was still performing and even that didn’t stop him, it was crazy. I also had the opportunity to meet Chris Mullins, the Head Men’s Basketball Coach, and took a picture with him. This was a Great Experience for me!!!

On Saturday, I had AAU practice in the morning, then I had a dentist appointment shortly after practice. After that, I attended one of my school friends’ birthday party, I really had a good time. This is how my week went, I hope all of you enjoyed. Stay tuned for what I have in stored for next week’s entry!

Until next time, Trey Patterson signing off!
Posted by basketball spotlight at 7:46 AM